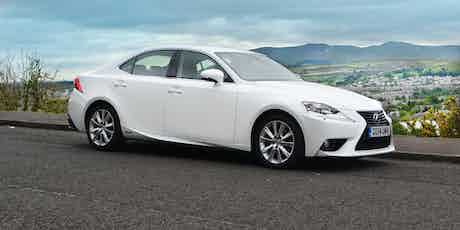 If you’re in the market for a compact executive saloon, the obvious choice has always been the BMW 3 Series. It’s fun to drive, has a heap of engine choices, and has a pleasingly Germanic quality to every switch, button and control.

It may well be multi-talented, but that doesn’t mean that it’s a car for all people. The virtues of the Mercedes C-Class and Audi A4 are well known, but what does the Lexus IS have to offer? We spent a week with the IS 300h to discover why it could turn you away from the inimitable BMW.

If you’re already sold on this refined hybrid, find out what discounts are on offer by choosing your ideal Lexus IS 300h in our car configurator.

The 3 Series’ cabin is unquestionably a lovely place to sit, but Lexus knows a thing or two when it comes to interior design. The IS takes inspiration from the stunning LFA supercar – a wide pair of central air vents sit above the centre console which is steeply raked towards the wide transmission tunnel. Not only does it look classy, but it’s easy to navigate.

It’s beautifully screwed together, too – we’re confident that even 100,000 miles down the line, there won’t be a squeak or rattle to be found. The steering wheel looks great, and the rim isn’t too thick – as is often the case in some German rivals.

While the boot can’t quite match the BMW – the 3 Series offers 480 litres to the Lexus’ 450 – but there’s still more than enough room to swallow a family’s holiday gear. The door pockets are generous, and a couple of cupholders between the driver and front passenger are useful, if slightly in the way if you’d like to rest your arm.

The eagle-eyed among you may have noticed the ‘h’ at the end of the IS 300’s name. This stands for hybrid – a technology which Lexus’ parent group Toyota was one of the first to mass-produce.

The IS 300h uses a 2.5-litre petrol unit mated to an electric motor to produce a combined 220hp. Around town, the IS can potter about for a couple of miles in electric-only mode, resulting in near silent, emissions-free driving. Mated to the CVT automatic gearbox, it makes for an executive saloon that’s very easy to drive.

It remains tranquil inside even when the engine engages, with its presence only telling when you floor it. There are two reasons why you’ll try to avoid doing so – first, because the CVT is slow to respond to throttle inputs, and second, the engine sounds rather nasty when pushed. It’s at its best when you’re driving in a calm manner.

Refinement is nigh-on class leading and, at motorway speeds, its hushed nature and excellent seats make the IS a fantastic long-distance cruiser. Ultimately, though, the experience is spoiled by a firm ride. While it’s marginally better than the Audi A4, it feels rather at odds with the car’s laid-back character.

The firm set up does mean the IS is fairly engaging in the twisty bits – there’s plenty of grip and the steering is accurate, if a little light. Drive like this though and you’ll be reminded of just how slow-witted that gearbox is as you wait an age for engine revs to rise and the car to accelerate.

Adding more unnecessary sportiness are the flappy paddles behind the steering wheel. They’re useful for eco driving – pull on the left-hand ‘downshift’ paddle and the amount of engine braking (and therefore energy used to recharge the batteries) increases, but using the right hand paddle to change up a gear does very little to the performance.

On a motorway cruise, the IS turned out to be fairly economical, if not mind-blowingly so. We managed about 48.7mpg, which could be beaten by some diesel rivals. However, it’s worth bearing in mind that the petrol you stick inside the Lexus’ tank is cheaper in the first place.

Around town, and with the electric motors being put to better use, that fuel economy figure increases to the mid-fifties. By contrast, a diesel’s mpg would likely drop in similar driving, so the hybrid Lexus becomes even more tempting if much of your time behind the wheel is spent sitting in heavy traffic.

Plenty of metal for the money

Costing £30,995, the IS 300h definitely has value for money on its side, especially when you consider how generous the equipment list looks. Our test car cost £31,605 – an extra £610 over standard for the Arctic White metallic paint, but every other goodie was equipped as standard.

Gadgets include a seven-inch screen which, in its default mode, splits to display the infotainment and sat nav functions simultaneously. The audio system is rich and loud enough to drown out your dubious attempts at singing, and the leather seats are heated and ventilated – perfect for the indecisive British weather. Bi-xenon headlights with LED trimmings are also standard.

Lexus has long had a reputation for faultless reliability and strong aftersales service, and the IS looks to be no different. In the most recent Auto Express Driver Power satisfaction survey, owners voted the IS the best car to own in the UK out of 201 car models surveyed. The closest direct rival was the BMW 3 Series, which finished 52nd.

We started by asking if the IS 300h is a worthy rival for the 3 Series. Depending on where your priorities lie, the answer is yes, absolutely. It’s more refined, it’s great value for money, and as an ownership prospect, it could prove to be more frugal in the right conditions.

Indeed, the IS can make a very strong case for being the most stress-free cruiser in this class. It’s a shame that the firm suspension prevents it from being quite as good as it could have been but, for commuters who spend most of their time around town, it’s a fantastic choice.

Find out what discounts are available by popping the Lexus IS in our car configurator. If you’re not totally sold on the Lexus, check out our other great discounts on our deals page or, if you’re still struggling to pick a car, head over to our car chooser.

Fuel duty and road tax: how to replace £35 billion a year of lost revenue
The 10 Best ‘Fast and the Furious’ Cars
Drag race: Ferrari F355 vs Kia EV6
Citroen e-C4 X revealed: price, specs and release date
Eyesight requirements for driving
10 of the best 60s cars
Road tax on electric cars: what you need to know
Drag race: Porsche 911 Turbo S vs McLaren 720S vs Lamborghini Aventador SVJ
VW Tiguan vs Skoda Karoq – which is best?
What does the engine management light mean?
Skoda Karoq vs Skoda Kodiaq – which is best?
8 of the best home EV chargers
Ford Titanium: what is it and is it worth it?
Ford EcoBlue engines explained
The best alternatives to the Ford Kuga