What is the National Speed Limit in the UK? 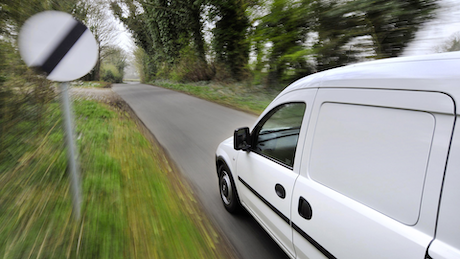 Waking up to find a speeding ticket on your doormat is something that every motorist dreads, but what is the national speed limit?

The national speed limit for cars is 70mph on motorways and dual carriageways with a central barrier or reservation, 60mph on single carriageways and 30mph in built-up areas.

Being caught speeding will net you a minimum of a £100 fine and possibly three points on your license, but this can be increased depending on how fast you were going.

This guide will walk you through the different speed limits in the UK, what to do if you don’t know what the limit is and what happens if you get caught speeding.

What is the national speed limit on different roads in the UK?

The national speed limit for cars, motorcycles, car-derived vans and dual-purpose vehicles is 70mph on motorways and dual carriageways with a central barrier, 60mph on single carriageways and 30mph in built-up areas.

A car-derived van is a commercial vehicle that is based on a car’s platform, for example, the Ford Fiesta van. Most vans are not car-derived, so check your V5C logbook to make sure.

The national speed limit varies depending on your vehicle type, with vans and trucks having lower speed limits. Below is a table showing what the limit is for different types of vehicles.

What is a variable speed limit?

Variable speed limits are used increasingly on new ‘smart motorways’ and busier motorways such as the M25 and M1. On roads such as these, the speed limit may be lowered to ease congestion or warn of an upcoming hazard.

The revised speed limit will be displayed on the gantries above the carriageway and is normally enforced using average speed cameras behind the signs. The penalty for breaking these temporary speed limits is the same as it is for a fixed speed limit.

A national speed limit sign is a white circle with a black diagonal line running through it. This usually refers to a 70mph speed limit on motorways and most dual carriageways and a 60mph limit on single carriageways in a car.

These are the most common types of speed limits and will be displayed on a sign with a number in a red circle.

The most common speed limits are 20mph, 30mph, 40mph and 50mph. These will be enforced using fixed speed cameras or mobile camera vans,

Local councils can set their own speed limits, however, they have to be clearly displayed. The signs will look similar to fixed speed limits, showing the limit in a red circle.

Areas such as school zones or places where there could be vulnerable road users will usually have a 20mph speed limit in place, enforced using traffic calming devices such as speed bumps.

What if I don’t know what the speed limit is on a road?

If you’re driving in a built-up area with lamp posts lining the street and there are no speed limit signs in sight, the speed limit is most likely 30 mph. If it’s anything other than 30mph there will be a sign at the start of the new speed limit zone and there should be ‘repeater’ speed limit signs placed at intervals along the road telling you what the limit is.

Motorways will be the national speed limit unless you see signs telling you otherwise. It’s important to note that it’s your responsibility as the driver to be aware of the speed limit on the road you’re driving on, and breaking it could lead to prosecution.

How many mph can you go over the speed limit?

Speed limits in the UK are absolute, meaning you can technically be charged for going 1mph over them.

However, most police forces and speed cameras will have some discretion and may offer a buffer. Sometimes this is 10% above the speed limit plus 2mph, but this will depend on which police force you’re caught by.

What happens if I’m caught speeding?

If you’re caught speeding, the first thing you’ll get is a Notice of Intended Prosecution through the post to the registered keeper of the car. You have to fill this in and send it back, giving the details of who was driving the car at the time.

You’ll then get a Fixed Penalty Notice in the post detailing what punishment you’ll get. You can dispute the ticket, however, pleading not guilty will mean you’ll have to go to court and prove your innocence. If the court then finds you guilty you may face a bigger fine.

How many points do you get on your license for speeding?

The minimum fine is currently £100 and three points on your license, however, this can go up depending on how far over the speed limit you were.

The maximum number of points you can get for a single speeding offence is six, though you can be disqualified from driving if the speeds are high enough.

In some cases, you may be offered a driver awareness course in place of the points, though this is becoming increasingly rare.

Can you lose your license for speeding?

If you get more than 12 points on your driving license this will result in you being disqualified from driving. So if you’re caught speeding multiple times this will lead to you losing your license.

You can also be immediately disqualified if your speed was high enough. The ban can last up to 120 days and you’ll have to reapply for your license once it ends.

Is driving too slowly illegal?

In some cases there may be a minimum speed limit in place, however, it’s rare. They can be used in places where driving too slowly can increase congestion or the risk of a crash, for example in tunnels.

The minimum speed limit will be a number in a blue circle, with the same sign shown with a red line through it at the end of the zone.

While driving too slowly on the motorway isn’t illegal, it can be dangerous and you may be stopped by the police. They will usually just give you a verbal warning, however, you could be charged with careless driving.

What is a speed limiter?

Some vehicles, such as commercial vehicles, are fitted with speed limiters. These devices will usually cut some fuel to the engine once you reach a certain speed so you can’t physically go over it.

A lot of cars are also fitted with manual speed limiters which allow the driver to set a maximum speed the car will get up to. This can be handy for making sure you don’t inadvertently go over the speed limit.

Looking for a great deal on your next car? Check out the carwow configurator to build your ideal car and get the best offers back from our trusted dealers. Not sure what you want? Tap the button below to get help choosing the right model for you.