Types of speed camera in the UK 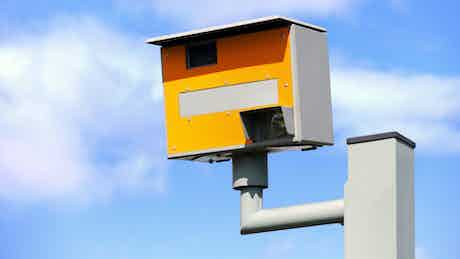 Speed cameras have been used in the UK since 1992. Their effectiveness in reducing accidents has been well documented but, even so, that heart-stopping flash as you inadvertently drive past one a few mph over the limit is never pleasant, while the same goes for the resultant penalty.

The Gatsometer BV or ‘Gatso’ speed camera has been around since speed cameras were introduced to the UK, and it is still the most commonly used type in the UK.
How does it work?

The Gatso camera originally used film to record any speeding infringements, while the new units – introduced in 2007 – are now digital. They never run out of film so if you see a flash, your image has been taken. They use radar technology and their camera takes two images of the back of your car to measure the time it has taken you to cover the distance between two points.

As a secondary measure of speed, white lines are usually painted along the section of road the Gatso is monitoring; this can corroborate the camera’s findings.

A Gatso will not take an image of the front of your car, so if you are travelling towards one that is situated on the other side of the road it will not record a speeding infringement.

A Gatso camera can be found all over the UK, with units permanently placed at high-accident hotspots. While Gatso as a brand makes other types of traffic camera, including red-light cameras, the firm has become synonymous with the classic raised box design of speed camera.

The Truvelo is a forward-facing speed camera which uses four sensors to measure the speed of a vehicle approaching it.
How does it work?

Unlike the Gatso, the Truvelo takes an image of the front of a vehicle, which can help identify who was driving at the time.

To avoid blinding the driver, an infrared flash is used; this can either be integrated into the unit or mounted alongside it. To back up the camera’s data, three white lines are painted just in front of the unit on the road. The speed at which the vehicle crosses these lines will indicate the speed it was travelling at the time.

There is no visible flash as you get with a Gatso, so it is not always possible to tell whether you have been caught.

Truvelo cameras are common in Hampshire and Northamptonshire, but are widely used elsewhere in the UK.

Where are they found?

Average speed cameras are predominantly used on motorways and dual carriageways, however they can be used on sections of roadwork, and other stretches of road as well.

The SpeedCurb is a speed camera used to capture speeding violations in individual locations.

It uses a series of sensors embedded into the road which measure the time a vehicle takes to travel across them. If the vehicle exceeds the set limit then the SpeedCurb takes a set of three images, two of the vehicle and one of the number plate. White marks painted on the road can also be used to calculate the speed of the car if there is a dispute.

This system is capable of monitoring two lanes of traffic at once, and takes images of the rear of the vehicle.

SpeedCurb units are found mounted high above the road on purpose-built poles. They can be found in built-up areas as well as dual carriageways.

The REDFLEX is a versatile speed camera which can be used for both single location speed checking as well as average speed measurement. REDFLEX systems can be used for traffic light violations and road junction violations.

The REDFLEX uses two radar devices to analyse data and it is capable of monitoring up to six lanes concurrently. It can detect speeding violations in both directions of travel, and uses a high-resolution camera.

Depending on the setup, REDFLEX cameras can detect multiple traffic violations such as when a vehicle speeds through a red light.

REDFLEXred cameras can be found at intersections while REDFLEXspeed units are used on motorways and major roads.

A mobile speed camera can be moved around from one location to the next. Certain models are based on fixed versions, like the REDFLEX and Gatso mobile units, while others are designed specifically to be used on the move.

Most mobile speed cameras use either radar or laser beams to measure speed. Laser guns can be aimed at a flat surface on the target vehicle and provide a readout within about half a second. They are accurate up to 1 mile.

Radar guns reflect radio waves back to the unit from the vehicle and provide accurate reading up to 300 yards. It takes around 3 seconds for a radar gun to get a reading.

Both types can be used on the move, or be mounted on a tripod at the roadside.

Mobile speed cameras can be used just about anywhere, they are a popular speed enforcement tool along motorways where they can be used from within police cars or set up along the road or inside a van in high-risk areas at short notice.

Are all speed cameras yellow?

The majority of speed cameras are painted yellow, as their presence is intended to discourage speeding as much as catch speeding incidents. There is no legal requirement for cameras to be painted yellow, however, with many overhead gantry cameras not being visible, aside from in your rear-view mirror after you’ve passed them.

Do all speed cameras flash?

No. Some older designs like the Gatso and Peek camera systems still use a visible flash, but many newer models use infrared lights and flashes which are not visible to the naked eye.

What range do speed cameras have?

Cameras in a fixed location are usually focused on a certain section of road, often denoted by white road markings. Some mobile laser units have a range of up to 2 miles, while most cameras are able to take clear images up to 1000 yards. Average speed cameras like the SPECS system can monitor you up to a distance of 12 miles, and much more if multiple cameras are used.

Are speed cameras always on?

Not necessarily. Cameras can be switched off by the authorities, however you will be hard pressed to identify which ones are operational and which ones aren’t.

Do speed cameras work both ways?

Most cameras focus on one direction of travel. A Gatso system will only focus on one lane in a single direction, while more modern units can monitor multiple lanes and vehicles and two units can be mounted back-to-back, allowing for monitoring in both directions.

How do I know if I’ve been caught by a speed camera?

A flash doesn’t always mean you have been caught speeding and in many cases the first you will know of it will be when you receive a Notice of Intended Prosecution (NIP).

What is the penalty for speeding?

This depends on how much you have exceeded the speed limit. The typical fine is usually three points off your licence and a £100 penalty, although you may be offered a speed awareness course instead. For a detailed outline of what can happen when you break the speed limit read our speeding penalty guide.

Now that you know everything about speeding cameras, how about taking a look at the latest offers on your favourite sports car (or economy hatchback) through carwow?

change you car the easy way