Drink drive limits in the UK: What to know 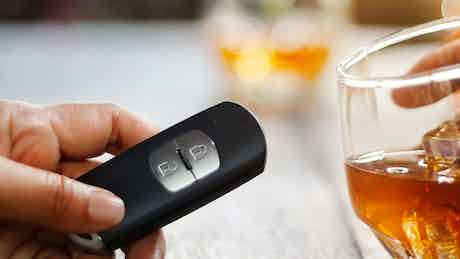 The consequences of breaching UK drink-drive laws can be severe and tragic, so it’s important to know the rules

Around 230 people are killed in Great Britain every year as a result of drink driving, while in Europe it’s estimated that one in four road deaths are alcohol related.

The safest, most responsible, and only recommendable attitude to take is to simply not drive after even one drink, but it’s still important to know what the legal drink drive limit is in the UK. Our guide explains all.

How much can you drink and drive in the UK?

While health leaders set recommended levels of alcohol consumption in ‘units’, with one unit being equivalent to a 25ml measure of spirits, the legal level for the amount of alcohol you can have in your system and still legally drive is determined using three measurements. The limits are lower in Scotland than they are in England, Wales and Northern Ireland.

It is impossible to say what these limits translate to with regard to specific amounts of drink. This is both because alcohol strength can vary significantly between different beers, wines and spirits, and because different people’s bodies process alcohol at different rates depending on sex, age, body size, fitness, stress levels and other factors.

Get a great price for your existing car with carwow

For this and other reasons, the only safe approach to take is to not have a single drink if you are going to be driving that day. Also bear in mind that it is very easy to still have have alcohol in your system the day after drinking, to the extent you could still be over the drink-drive limit. If in any doubt, do not drive.

In England, Wales, and Northern Ireland

The limits in Scotland used to be the same as the limits in the rest of the UK, but were lowered in December 2014 after research showed reducing accepted legal levels of alcohol could lead to reduced road fatalities.

What’s the penalty for drink driving in the UK?

If you are caught over the drink-drive limit you will find yourself in court. This is likely to be a magistrates court, unless there is a charge of Dangerous Driving involved in your offence, or if you are accused of causing a fatal accident.

There are three common offences drink-drive offenders can be charged with, and the maximum penalties vary for each:

There are separate penalties for failing to provide a breath test, and these are detailed below.

If you are stopped by the police and they suspect you are over the drink-drive limit they will breathalyse you by the roadside.

If the breathalyser reading indicates you are over the limit you will be arrested and taken to a police station where two evidential alcohol readings will be taken; this is done on a specialist, approved breathalyser, and the lower of the two readings will be used by the Crown Prosecution Service if a charge is brought against you.

You will be asked a few questions before you provide the two evidential specimens, including whether you have had any alcohol, mouth wash, medication, or eaten within the last 20 minutes; if you have, the reading will not be taken until 20 minutes have elapsed.

Our simple configurator will help you choose your dream car

If you refuse a breath test

If you refuse to provide a roadside breath test without reasonable excuse you face a fine of up to £1,000 and four penalty points. You will be arrested and taken to the police station, where you will be required to provide an evidential breath specimen; fail to do this and you face being charged with a further, separate offence, punishable by up to six months in prison, an unlimited fine, and a ban of at least a year.

Note that pretending to blow, deliberately not blowing hard enough, or sucking on a breathalyser machine will be considered as refusing to provide a sample.

As well as the official penalties set out above, there are a number of other negative consequences to a drink-drive conviction.

It is possible to appeal the length of a driving ban, but this tends only to be successful if there were technical errors connected to your case.

How to report someone for drink driving

Fifty years ago, attitudes to drink driving were very different, but getting behind the wheel after drinking is now, justifiably, seen as a very serious offence – both by the police and courts, and society as a whole.

If you suspect someone is, has, or is about to drive having drunk too much, you can use 999 to contact the police, as the potential consequences of their actions could be tragic.

How many units can you drink and drive?

UK drink-drive limits are not measured in units, but by the amount of alcohol present in your breath, blood or urine.

When can I drive after drinking?

This is impossible to accurately gauge. If you are in any doubt, do not drive at all.

How does drinking alcohol affect your driving behaviour?

Alcohol makes your reactions and cognition slower, impairs your decision-making ability, can cause over-confidence, and is associated with a host of other characteristics that make it wholly incompatible with driving.

When did drink-driving become illegal?

In 1930 it became illegal to drive after having drunk so much that you were “incapable of having proper control” of a vehicle. In 1960 this was changed so that it was illegal to get behind the wheel if you were “unfit to drive through drink or drugs”. The current drink-drive limits weren’t introduced until 1967, however.

Can passengers drink alcohol in a car?

It is not illegal for passengers to drink in a car, but it may not be wise.