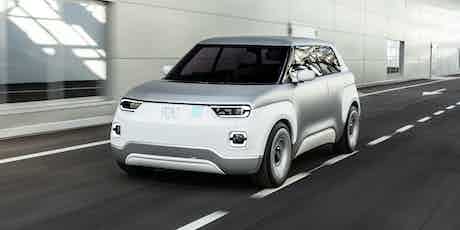 The quirky-looking Fiat Centoventi will go into production as an electric-car companion to the recently revealed electric 500 city car.

Fiat‘s adorable Centoventi (that’s Italian for 120, by the way) will go into production as an electric replacement for the ageing Fiat Panda.

The new Fiat Centoventi’s blocky design looks a bit like its designers lost their pencils and had to come up with something using Lego bricks. Just like Lego, you can personalise and rebuild your Fiat Centoventi using a range of standard pieces. There are a few different bumper trims, some colourful vinyl wraps for the body, a few bright paint options for the alloy wheels and even a range of different roof styles with fittings for official Fiat accessories.

The Fiat Centoventi’s boxy proportions are quite similar to the outgoing Panda‘s. It comes with large windows, a bluff front end, four doors and there’s very little bodywork beyond the front and rear wheels to help make manoeuvring in town a doddle. The concept’s handle-less doors and super-slim pillars will probably be toned down for production, but its simple front end – free of any big fake grilles – should be carried over onto the finished car.

The Fiat Centoventi concept came with a pretty feeble 60-mile range – much less than most electric cars you can buy today. However, Fiat plans to offer expandable modular batteries that can be added or removed depending on how far you need to drive. For example, if you’re planning a long trip you can visit a Fiat dealer beforehand and rent extra batteries that’ll let you drive up to 300 miles between charges.

The Centoventi concept also featured a retractable charging cable – a bit like a vacuum cleaner. Hopefully, the production version will feature a similar device. Fiat hasn’t announced how long the Centoventi will take to charge, or what charging capabilities it’ll come with, however.

Some city cars claim to have simple, minimalist interiors, but the Fiat Centoventi’s cabin takes this to a whole new level. There’s one large screen in front of the steering wheel, but that’s pretty much it – you don’t even get a dashboard. Instead, there’s a large shelf with hundreds of holes drilled into it so you can secure things using brightly coloured elastic straps and specially designed holders.

The Fiat Centoventi comes with a large-ish screen in front of the steering wheel that displays all your driving information, alongside a second infotainment display. Fiat may also experiment with another feature of the Centoventi concept – it’s built-in tablet phone holder that lets you attach your device to the Centoventi’s screen and use its navigation and music-streaming apps.

You can expect the finished Fiat Centoventi to come with plenty of the clever storage ideas shown on the Centoventi concept car. In addition to the neat dashboard (shown above), it may feature the concept’s removable front seat. Not only would this give you plenty of space to load long items through from the boot, but it also lets you clip in a child seat without worrying about locating hidden Isofix anchor points.

Fiat hasn’t announced when the Centoventi will go on sale, but you can expect to see to in showrooms within the next few years. It’ll cost from around the same as the recently revealed electric Fiat 500 – high-spec versions of which cost from close to £30,000. The Fiat Contoventi will come with plenty of customisation options, too. The concept previewed a range of 120 optional extras, including 114 that you could buy online and fit yourself at home – if you fancied giving your car a DIY makeover.

If you can’t wait for the Fiat Centoventi to go on sale, check out our pick of the best electric cars on sale now or read our electric Fiat 500 price, specs and release date story on the Centoventi’s retro-styled cousin.