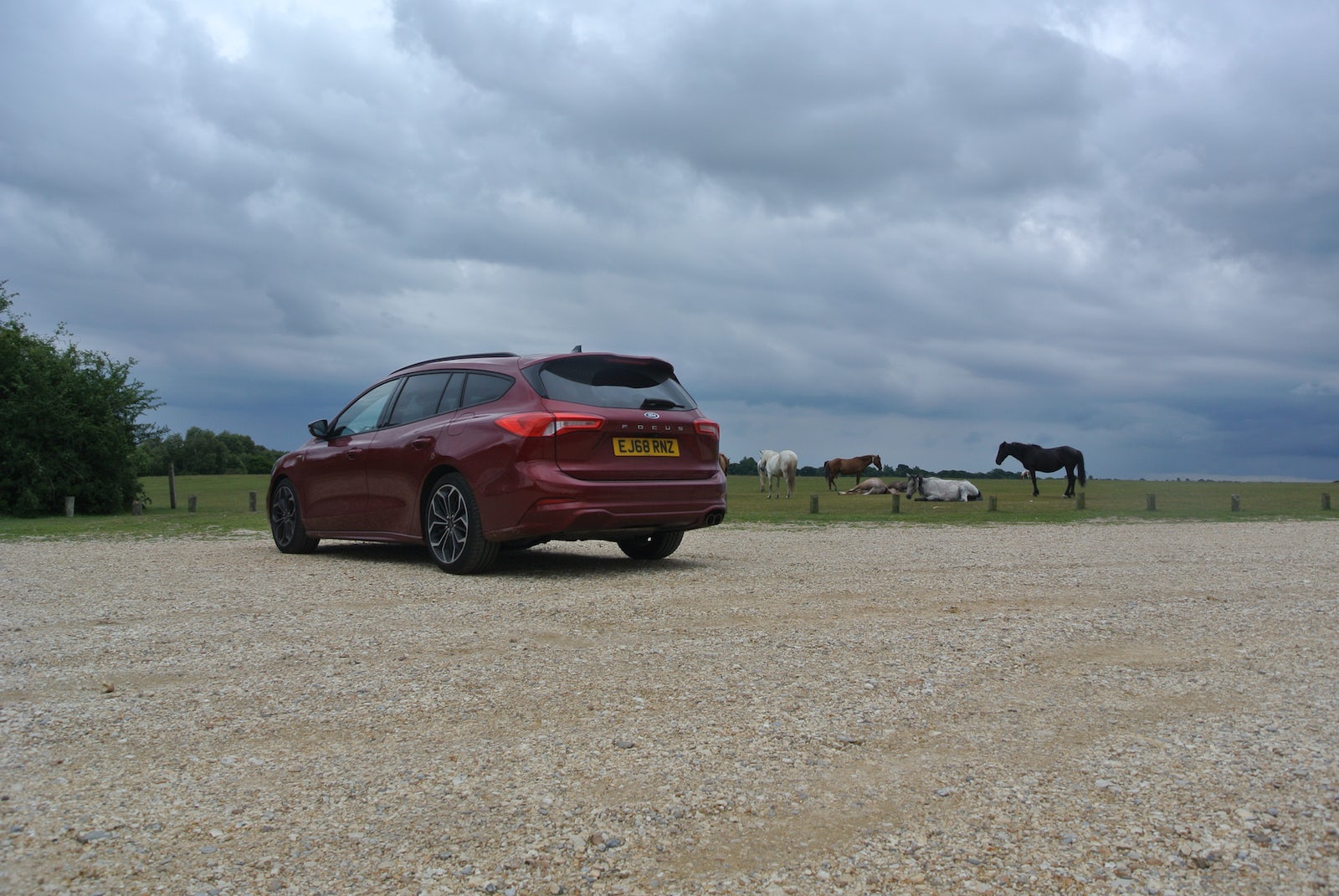 In its final month with us, the Ford Focus Estate goes out in a blaze of glory providing transporting staff writer Nick (and friends) to this year’s Download Festival.

We already know that the Focus Estate can comfortably accommodate four adults for long periods – handy when our 250-mile round trip would take in plenty of lengthy festival traffic jams – but I was impressed by how well it dealt with tents, sleeping bags, air beds and a (frankly) excessive number of frosty beverages.

Not being an SUV means the Ford Focus Estate’s boot floor is nice and low to the ground so it’s a doddle to slide in heavy bags. We had no need for any of the Ford’s tie-down hooks, but the underfloor storage proved the perfect spot for a set of folding camping chairs and there was more than enough space left over to hide a few valuables safely out of sight.

The Ford Focus Estate’s usually excellent rear visibility took a bit of a hit once we’d packed the boot to the brim, but it coped very well for a car weighed-down by four adults and enough camping paraphernalia to shelter a displaced population.

Given the choice, we’d have probably picked one of the Focus Estate’s diesel engines for this trip – given their extra grunt at low revs and fuel-sipping nature at motorway speeds – but the 182hp 1.5-litre petrol performed admirably well. In fact, we even saw our average fuel economy climb slightly from 36 to 38mpg – hardly earth-shattering stuff, but not bad for a little three-cylinder unit with a very heavy load in tow.

Being an ST Line model, our car comes with stiffer, lower suspension than the standard Focus Estate and larger alloy wheels with thinner, low-profile tyres – the opposite of what you want when traversing a muddy field at the end of a long drive.

Thankfully, there was enough travel left in the Focus Estate’s handling-focussed suspension to deal with a few welly-swallowing potholes without the underbody scraping. It’s no Land Rover Defender, but it goes to show that you don’t necessarily need an SUV to cope with the odd off-road excursion.

In fact, the only fly we found in the Ford Focus Estate’s otherwise insect-free ointment was when the time came for its sat-nav to guide us home. Having plotted a route, the whole infotainment system froze – throwing up an ominous blue screen that suggested we’d found our way into a previously undiscovered inland sea somewhere near East Midlands Airport.

Channelling our inner IT department, we turned it off and on again, but to no avail – Chris Moyles still whined ceaselessly through the speakers and our way home remained a mystery. Thank goodness for Google Maps…

So having sampled the Focus in entry-level 1.5-litre 120hp diesel hatchback form and as a top-of-the-range 1.5-litre 182hp petrol estate, which would we choose? Without stating the obvious, the estate car is the one to go for if you need added practicality but, if it was our money, we’d have the diesel engine – it drinks fuel like a camel drinks water and, unlike the anodyne 182 petrol, feels brisker than its output suggests.

But could the launch of the new Focus ST hot hatch have us going back on that decision? We best get one in for a few months to find out…

It is written into UK law that when running an estate car on a long-term test that, at some point during its updates, there must be a shot of it loaded to the gunwales with junk on its way to the local tip. That time has come.

The challenge? Dismantle a frankly offensive built-in cupboard and desk unit from my spare bedroom and get it to Wandsworth Recycling Centre in as few trips as possible. My weapon of choice? Our Ford Focus Estate.

And what a choice. You’ll not be surprised to hear that the estate version of the Focus is more spacious and practical than the hatchback, but more importantly, it compares very favourably with similarly sized estates such as Vauxhall’s Astra and Volkswagen’s Golf. In short, rear seats flipped flat, the ghastly desk was out and gone in a jiffy.

The Focus Estate is simply huge inside, as you can see from our pictures, but the other great thing about it is that its proof you don’t need to spend much to enjoy driving. OK, so our particular model is one of the most expensive of the range, but having experienced much cheaper Focus models, it’s true of them all.

And despite our ST-Line X being fitted with large 18-inch alloys, it doesn’t thud into ruts and potholes, either, adding to the sense that you’re sat above thoroughly well-engineered underpinnings. It’s the sort of thing that, even if you have no interest in cars (my Mrs), you can sort of ‘feel’ – even as a passenger. It feels expensive to drive, without being so.

I even love the way our Focus looks. You see few out and about in our Ruby Red paint which is a real shame, and ST-Line X trim gives it enough aggression without it looking, y’know, Halfords. Well, aside from the silly fake carbon fibre trim dotted about inside. Tsssk.

The only other minor grievance is our car’s 182hp 1.5 petrol, which is strong when its turbocharger has woken up, but can feel a little lethargic below that magic rev marker forcing you to concentrate on changing down a gear or two and stoke some life from it.

All-told, though, the Focus Estate is proving itself every bit as recommendable as the carwow award-winning hatchback.

When was the last time you looked at an estate car and thought ‘hmm, I wouldn’t mind parking one of them on my driveway’? Can’t remember? No surprise there – after all, stylish SUVs and posh upmarket hatchbacks have made practical-yet-desirable family wagons something of a rarity these days.

The Ford Focus Estate looks to address this imbalance and, on the basis of our first week with this sporty ST-Line X model, it’s off to a pretty good start.

At a glance, you’d be forgiven for mistaking it for a full-blown ST hot hatch. After all, our car’s intake-ridden bumpers, red brake calipers and standard 18-inch alloy wheels all look pretty much identical to those you’ll spot on Ford’s upcoming alternative to the VW Golf GTI.

It also comes with dual exhaust tips – real ones, rather than the fake plastic items on many affordable family cars – a roof-mounted spoiler and bright Ruby Red paint. That paint job means you won’t have trouble spotting it in a crowded school car park, but it’ll set you back a whopping £800.

Eye-popping paint is only the tip of our car’s iceberg of optional extras. The opening panoramic sunroof costs £995, the hands-free opening bootlid £600 and the detachable tow-hook £600.

More useful – for our needs, anyway – is the £500 Convenience Pack. This adds a reversing camera, clever pop-out door protectors and a system that’ll steer us into bay and parallel spaces automatically.

Our Ford Focus Estate’s cabin hasn’t been left wanting for goodies, either – it’s been fitted with a £400 head-up display, a £100 wireless charging pad and a £150 heated steering wheel. In fact, all the optional extras combined add a wallet-bruising £5,795 to our car’s overall price. As a result, it’ll set you back £32,550 compared to the £26,755 standard ST-Line X model.

Thankfully you do get plenty of features as standard, including an eight-inch touchscreen with built-in Apple and Android smartphone mirroring and six-way electrically adjustable leather sports seats come as standard. These have already proved their worth during some particularly unpleasant bank-holiday traffic.

Our time spent stuck on the M25 left us wishing our Focus Estate came with an automatic gearbox instead of a six-speed manual. Not only is the manual slightly vague, but only automatic models come with adaptive cruise control and lane-keeping assist as part of the £500 Driver Assistance Pack.

That being said, this 182hp 1.5-litre petrol model isn’t the one to choose if you do lots of motorway miles. More likely, you’ll consider it if you fancy something cheap to run on the commute yet pretty good fun to drive at the weekend.

On that first point, we’ve seen the Ford Focus Estate return 37mpg in a mix of city and country driving – not bad considering Ford claims it’ll return between 41.5 and 44.1mpg. Sadly, the Focus Estate’s 1.5-litre petrol engine hasn’t impressed in the fun-to-drive stakes – yet. This three-cylinder unit grumbles quite loudly and revs rather lethargically when you accelerate.

That being said, the ST-Line X’s lowered suspension and direct steering mean it’ll still happily tackle a twisty road without feeling out of its depth. It certainly feels more at home nipping from one twisty road to another than your average family SUV.

Bookmark this page for our next update.