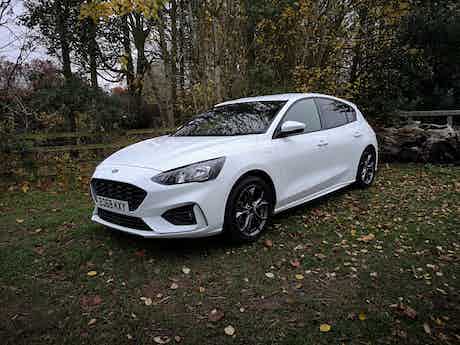 The new Ford Focus is the most practical Focus Ford has ever built, but has that come at the cost of its famously sparkling driving experience? Read on to find out.

This past month has given the Focus a chance to show us two sides of its character – both its sensible side and its fun side.

First to the sensible side of its personality, and *that* 1.5-litre diesel engine. You might think we’d have gone for the 1.0-litre petrol model – its zippy performance and lightweight seem like the perfect match for the sharp-handling Focus. But actually, it was the diesel that caught our attention. Why? Well, for one it sips fuel like a desert explorer rationing out their last bottle of water. Even in central London traffic, the Focus can soar over 50mpg without you having to make any kind of effort. But our personal record has been London to Gatwick and back (about 60 miles) on the light with ten miles to spare.

Sure it’s not all good news, the diesel doesn’t have the revy nature of the petrol, but it does do some things better – like motorway overtaking. The 1.5 might only have a 120hp but 300nm of torque from just 1,750rpm means it actually has a surprising amount of urge when you join the fast lane on the motorway. It’s also relatively smooth for a diesel, with the clatter you get from a cold start subsiding for a noise that could trick you into thinking it’s petrol. Our only real complaint is how long it takes to get any kind of warmth out the heater on a cold morning.

But while the heater won’t warm your heart, the way the Focus drives certainly will. Even without the independent rear suspension you get on more expensive models, our Focus has sharp steering and bucket loads of front end grip that mean you can chuck it into corners with absolute confidence that it won’t do something unpredictable, even through a series of tight bends it feels remarkably composed thanks to suspension that sits on the stiffer side of soft – keeping body lean in check without ever feeling uncomfortable.

In fact, the Focus is so good it makes some hot hatches seem average to drive – but can it stay in our good books? Well, you’ll have to tune in next month to find out.

Having learned to drive in a Ford Focus and owned a Fiesta, it’s fair to say I’ve always been a fan of the Blue Oval, write news editor Russell Campbell, so I was pretty smitten when I found out my new long-termer would be wearing that badge. What model did we go for? An ST-Line with the 1.5 TDCI EcoBlue – a combination of words, numbers and abbreviations that means this is the most economical Ford Focus coming with a 1.5-litre diesel engine and a six-speed manual gearbox. The ‘ST-Line’ bit denoting that, despite sipping fuel, it also looks sporty inside and out, has firm suspension that stops it leaning like a tower in Pisa around corners and larger 17-inch alloy wheels with grippier tyres.

To that, we added a few choice options, including Frozen White paint (£250), Ford’s SYNC3 sat-nav upgrade (£350), Ford Pass Connect in-car WiFi (£250), which includes a wireless connection to the car; and tinted rear windows (£250). The biggest addition, however, is the £750 Convenience Pack. It bundles together a load of handy kit including a rear-view camera, door edge protectors and park assist. All in, that gets us to an on-the-road price of £24,700. First impressions? Well, having spent a few months driving our excellent, but ultimately rather numb, Skoda Kodiaq, it’s nice to get in a car that I can truly enjoy driving. The Ford’s combination of direct steering, generous grip levels, well-weighted pedals and snickety gearbox mean it really is fun to chuck down a decent road.

That’s despite it having an engine that, on paper, sounds like a real party killer. In fact, 120hp, the mid-range diesel is smooth for its ilk and feels surprisingly nippy – quicker than its 0-62mph time of 10 seconds would suggest. That’s because the stuff that matters – the 300Nm of torque – arrives at just 1,750rpm so you have a decent amount of acceleration for overtaking. And, it’s impossible to argue with the Ford’s fuel economy – with a little bit of effort, I’ve seen nearly 60mpg driving through central London on a busy Saturday morning.

What else do I like? Well, while I’m not a fan of white cars, I think our Focus is a bit of a looker thanks to its lowered suspension, ST Line body kit, twin exhaust pipes and charcoal alloy wheels. Even the red-stitched seats appeal to my inner boy racer. Then there’s the high-definition display for the rear parking camera, which makes other cars’ cameras feel like you’re peering through a pair of steamed up goggles. Finally, there’s the solid front bumper which deflected the failed parking attempt of my dear old mum (relatively) unscathed.

Bookmark this page to read our regular updates.