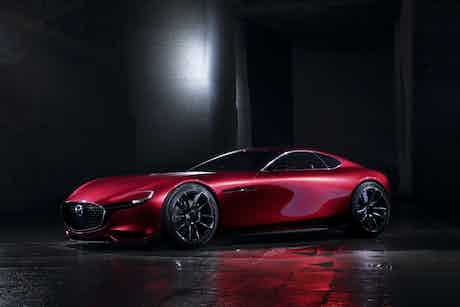 Mazda is rumoured to be developing a successor to the legendary RX-7 and RX-8 sports cars – it’s called the Mazda RX-9. Here’s everything you need to know.

Mazda design boss Ikuo Maeda has confirmed that a top-of-the-range sports car based on the RX-Vision Concept, and likely to be called the RX-9, is still a real possibility.

While it’s too soon to confirm a date for the launch of the new RX-9 we could see the car as soon as 2020 and it’s likely to carry over some of the technology that will feature in Mazda’s new range-extender hybrid that will be revealed next month.

The RX-9 will be Mazda’s flagship sports car and you can expect it to have a price tag of at least £50,000 to put it head-to-head with the new Toyota Surpa and Porsche Cayman.

There’s been talk of a new RX-9 – a successor to Mazda’s RX-7 and RX-8 sports cars – since the covers were whipped off the Mazda RX-Vision concept (pictured) way back in 2015.

It’s a testament to that car’s design that, four years on, it looks fresher than some brand-new cars. There are some obvious stylistic similarities to the new Mazda 3 including its kinked grille and piercing headlights and the two cars share the flowing lines of Mazda’s Kodo design philosophy.

The car’s poised stance could be thanks to the RX-9 coming with a compact new rotary engine that sits low down in the car. That seems to be confirmed by a design patent recently filed by Mazda which shows the front of a car which has space-consuming, double-wishbone suspension (the kind usually given to sports cars) and a small engine bay that would be the ideal home a small-but-powerful rotary engine.

Instead of using conventional cylinders, the rotary engine’s rotor spins inside its housing to create a turning motion. It has fewer moving parts than conventional engines, is smaller, lighter and smoother. In the RX-9, you can expect it to be turbocharged to produce power of around 300hp, a figure that would get the car from 0-62mph in less than six seconds.

What that rotary engine should also mean is that the RX-9 will be great to drive, its low centre of gravity and lightweight making the car feel nimble in corners. Like the Mazda MX-5 sports car, you can expect the RX-9 to be rear-wheel drive and to send its power through a limited-slip differential that should make it easy to slide – on a race track, of course.

If you can’t wait for the RX-9 to go on sale read our in-depth Mazda MX-5 review for more information on its dinky soft-top sibling.