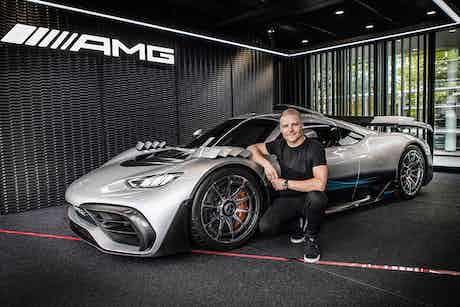 Mercedes has christened its new Formula 1 car for the road – the Mercedes-AMG One – it packs a 1,000hp punch and more aero tech than a Nestle factory. Read on for the car’s price specs and release date

The upcoming Mercedes AMG hypercar – previously known as the Project One – will now be called, simply, the Mercedes AMG One. This Formula One car for the road will pack a 1,000hp punch when it goes on sale in 2019 and is set to cost more than £2,000,000.

Mercedes-AMG One price and release date

Let’s get the bad news out the way first – the Mercedes One’s £2,000,000 price tag means it’ll be out with the grasp of almost all of us. But, If you’re lucky enough to be able to afford one, you can buy a car that defines a generation – certainly, as subtly hinted by Mercedes’ F1 driver Valtteri Bottas’ appearance in the main pic, it defines the present generation of F1 thanks to its small-capacity, electric-boosted turbocharged petrol engines and aero package that makes a 747 jumbo jet look under-winged.

The Mercedes AMG One will come with just as much tech as a Formula One car, but its slinky body looks very different to that of an F1 racer. Rather than have protruding wheels and huge slick tyres, the Mercedes AMG One wears an elegant, streamlined body made entirely from carbon fibre.

Up front, you’ll notice a road-scraping splitter that can be extended at high speeds to help create more downforce – pressure caused by air moving around the car that pushes it into the ground and helps the tyres produce more grip.

To help control how air moves over the rest of the car, the Mercedes AMG One’s bodywork comes with opening vents above the front wheels. There’s also a huge scoop on the roof that funnels air towards the engine, and a vast shark fin mounted to the rear bodywork to make the car stable at high-speed.

Also visible in these photos is a retractable rear spoiler that’ll pop out of the Mercedes AMG One’s rear bodywork. In Race mode, this’ll provide extra downforce to help it corner quickly, and will double as a powerful airbrake – just like the one on the Bugatti Chiron.

The Mercedes AMG One’s side skirts have been designed to look like the aerodynamic ‘barge boards’ on a Formula One car, and its luminous green and silver livery has been pinched from Mercedes’ F1 team, too. The Mercedes AMG One’s centre-locking wheels (that use a single large centre nut instead of four or five smaller ones) also come from the world of racing and will be exceptionally light – despite measuring 19 inches at the front and a whopping 20 at the back.

The One’s performance is also comparable to what a pilot might experience. Its combination of a V6 1.6-litre petrol engine and four separate electric motors produces  1,000hp, and help the car accelerate from 0-120mph in just six seconds and top out at nearly 220mph.

Two of the electric motors power the front wheels, making the Mercedes four-wheel drive, while of the remaining two – one spins the turbocharger to reduce lag and the other’s bolted onto the petrol engine to provide low-down urge before the turbocharger spools up.

Despite the huge performance, though, the One can claim – however tenuously – to have green credentials. It is capable of driving on electric power alone for up to 15 miles and its battery can be recharged using a three-prong plug.

While the Mercedes One might not look much like an F1 car on the outside underneath its slippery body the two have plenty in common.

Like an F1 car, it has an eight-speed, paddle-operated gearbox and, like an F1 car, it’s a load-bearing part that – along with the engine – supports the rear suspension and helps save weight.

The suspension itself is also an F1-derived pushrod system that eradicates lean in corners and also allows the One’s body to be lower and more aerodynamic.

Inside, the One’s two large infotainment screens could have been taken from any other Mercedes, but apart from this similarities are hard to come by.

The bare carbon-fibre dashboard actually forms part of the car’s structure and helps give the One a spartan race-car feel. Most of the car’s controls are found on the rectangular steering ‘wheel’ and you and your passenger are separated by the large transmission tunnel that runs between the two front seats.

Creature comforts are, unsurprisingly, harder to come by than in a Mercedes saloon, but the One does get air-conditioning, a camera that replaces the rear-view mirror and even some storage behind the seats.

Bookmark this page or subscribe to the newsletter at the top of the screen to keep up to date with the latest on the Mercedes-AMG One.