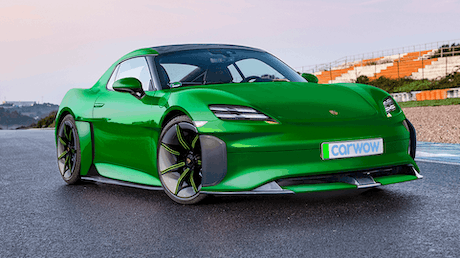 The next Porsche Cayman is set to launch as a game-changing electric sports car. Read on for full details.

A new Porsche Cayman is on the way and should arrive by 2025, as confirmed by Porsche’s Chief Executive Officer – Oliver Blume – during the firm’s 2022 annual media conference.

This new sportscar will use a set of completely new underpinnings designed solely for electric cars. It’ll be an alternative to the likes of the upcoming electric sports cars from Lotus and Alpine.

This exclusive render gives you an idea of how it could look.

The usual low-slung sports car look will remain, though slim LED headlights are set to be lifted straight from the concept along with a simple yet functional front bumper design.

The rear should carry over the aggressive haunches from the current car, although a new full-width LED light bar dominates the rear. A functional diffuser is set to feature — and there’ll be no need for exhausts, of course.

A drop-top Boxster version should launch alongside the Cayman, too. Expect a similar design, albeit with a drop-t0p roof.

Although it’ll take design inspiration from the stunning Mission R, the new 718 Cayman and Boxster are not expected to use that car’s frank;y bonkers 1,088hp dual-motor drive system.

The concept’s electric setup is a modular design, however, meaning the front and rear motors could potentially be used independently. It’s possible Porsche may choose to use just one of the Mission R’s motors in a future 718 Cayman or Boxster.

The mission R’s front-axle motor, for example, produces 435hp. This motor could potentially form the basis for a mid-motor rear-wheel-drive 718 Cayman replacement.

Check out the best EVs on sale

That’d give it 35hp more than the current Cayman GTS and should be good for a 0-60mph time of around 3.5 seconds.

Unlike the Porsche Taycan the new electric 718 Cayman will likely come with a taller chest-like battery mounted in the centre of the car rather than under the floor.

This means the weight of this new EV should be distributed in a similar fashion to today’s mid-engined 718 Cayman. This will help keep the car short and small, while also helping weight distribution.

Porsche has confirmed the new electric 718 Cayman will arrive in 2025. Can’t wait that long? Well, you can expect to see a concept car to appear a few years before that to preview the finished car’s design – as was the case with the Mission E concept that hinted at the Porsche Taycan’s design.

Pricing will likely take a fair bump over the current car’s £46,000 starting price to account for all the new tech.

It may well even be sold alongside existing internal combustion versions for a while. This would mirror Porsche’s plans to sell a new Macan EV alongside the petrol-powered model – for a few years, at least.

Looking to make the switch to an electric car? Take a look at the latest EV deals