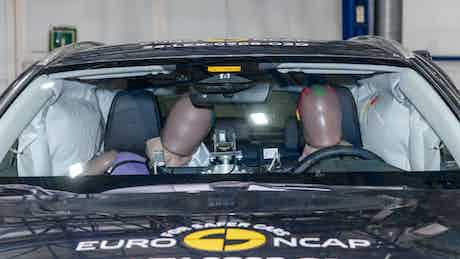 Euro NCAP has done a huge amount to improve car safety over the years, but some of its more recent results have been controversial; carwow investigates

Euro NCAP has been crash-testing the vast majority of mainstream new cars sold in Europe for more than 25 years. While submitting a car for crash testing is not mandatory, the organisation has tested around 3,000 cars over the last quarter of a century or so, and its crash tests have become a de-facto element of a new car launch.

But NCAP isn’t without controversy, awarding a series of low scores, particularly to older, cheaper cars without the latest electronic safety aids; unveiling a ‘dual-star’ rating system, which is more complex than the single-star system; and sometimes applying the star rating awarded to one car to others with which it shares a mechanical platform.

Our simple configurator will help you choose your next car

To address these issues, carwow spoke to Euro NCAP and Thatcham Research, a UK-based organisation that crash-tests cars in conjunction with NCAP.

It’s worth knowing the basics of what a modern Euro NCAP crash test looks like.

The lowest score in each of these areas determines a car’s overall star rating. This means a car can generate exceptional results in the adult, child, and pedestrian categories, but if it scores poorly for safety assist, its overall result will be determined by this.

Structural safety elements, such as how well a car’s cabin stands up in a collision, are known as ‘passive’, whereas electronic systems designed to prevent a collision occurring in the first place are known as ‘active’.

The most recent controversial Euro NCAP result saw the seven-seat Dacia Jogger score just one star overall in its NCAP test. This result was partially based on the score obtained by the mechanically similar Dacia Sandero Stepway, which was awarded two stars overall.

Like the Sandero Stepway, the Jogger’s electronic safety aids weren’t deemed to be as good as they could be by NCAP. Unlike the Sandero Stepway, however, the Jogger has a third row of seats; it was the lack of seatbelt reminders here, and the fact the curtain airbag does not extent to protect occupants in the third row, that dragged its safety assist score below a certain threshold, turning the Jogger into a one-star car.

“The results were carried over from the Sandero Stepway, and that was just into two-star territory in safety assist, And this thing with the Jogger’s third row was just enough – there was no margin for error.”

carwow asked Dacia if it considered customers were well served by Euro NCAP’s rating system. The firm told us: “Euro NCAP ratings are awarded as a result of their own testing protocol”, and explained that its decision not to include some electronic safety equipment was deliberate. “Dacia’s strategy is not driven by chasing Euro NCAP stars that would imply fitting vehicles with features and technologies that our customers do not want to use and/or pay for today.”

Dacia also said that it takes “the safety of our customers extremely seriously” and its “objective is to produce safe cars that are homologated and compliant to European safety regulations, all while meeting the expectations of our customers.”

The Jogger’s result raises a wider question about the importance NCAP places on active safety aids that aim to prevent collisions from happening.

“I’ll say it until I’m blue in the face: the active safety is as important as the passive safety. Much better you don’t hit anything than you hit something and protect [people], because you don’t know what you’re going to hit.”

He added that drivers are often slow or reluctant to accept new safety systems and rules, explaining: “When seatbelts were mandated people were saying they were dangerous, that they stop you from getting out of the car if you have a collision. We got through that.

“A lot of journalists out there are saying… ‘this vehicle’s got this pointless collision avoidance stuff on’. I fundamentally disagree, because there are so many crashes out there – 50% of crashes where the passive safety is not enough – you need more, so you need active safety to save the day. People might regard it as unnecessary – I disagree.”

Avery highlighted that while safety systems such as seatbelt pretensioners and dual-stage airbags have “been developing over the years”, the field of passive safety is now so well understood that improvements in this area follow “a law of diminishing returns”.

He explains that active safety, on the other hand, is where more dramatic improvements are to be found:

“Ever since ESC [electronic stability control] came on the market in about 2000, we saw the huge potential to reduce collisions happening in the first place, and the idea that prevention is better than cure. ESC started it – there was a 25% reduction in KSI [killed and seriously injured] with vehicles fitted with ESC – no brainer. We then moved onto AEB, and have seen potential reductions with that.”

Avery has previously said, however, that he considers Euro NCAP “got it wrong” when drawing up criteria for lane-keep assist assessments.

Platform sharing is the process of utilising the same mechanical backbone for multiple cars – is nothing new in the car industry, and it’s a vital way of making back the billions of pounds it costs to develop a new car. Volkswagen Group’s MQB platform, for example, cost a reported $8 billion to develop, but has formed the basis of around 60 different cars.

Euro NCAP will periodically apply one car’s crash-test result to another model that sits on the same platform. The score for the SEAT Arona SUV was based on the SEAT Ibiza hatchback’s result, and the Skoda Scala hatchback’s tests were used for the Skoda Kamiq SUV.

“We have what we call a ‘partner rating’ scheme, where cars that share a platform, share a lot of the structure, share this, share that – we can read results across, from one to the other.”

Asked to explain how the seven-seat Dacia Jogger can share its NCAP result with the Dacia Sandero Stepway, which is 16cm taller and 128kg heavier, Williams said: “There are rules for how much difference in mass is allowed, how much difference in height is allowed, and so on. And the Jogger met all those criteria, and we saw a lot of data from Renault themselves – in-house data – showing the performance was identical.”

In 2016 Euro NCAP introduced a dual-star rating system that allows a car to hold two different overall scores depending on whether it is fitted with optional safety features.

If you buy a standard DS 4, for example, you will get a car Euro NCAP rated as being four stars. But if you upgrade to the ‘Safety Pack Plus’ the DS 4’s autonomous emergency braking system uses a camera as well as radar, instead of just a camera. This leads to an improved score in NCAP’s safety assist category, which is enough to make the DS 4 a five-star car when this pack is fitted.

Aled Williams said he considers the dual-star system “a very simple concept”, and the idea of buying safety equipment with “improved performance” was “an easy one to understand.” He added that NCAP has rules about what features can and cannot be included in a safety pack.

Matthew Avery has a slightly different perspective, saying that while “the balance says the dual rating has more benefits than disbenefits”, he considers: “I’m inclined to believe the point of view that it’s confusing enough for consumers at the moment; the reason we’ve got a star rating is because we’ve got a very very small amount of time to engage with the consumer around safety.”

Of the last 50 cars tested by Euro NCAP the vast majority – 88%, or 44 cars – were awarded four or five stars overall, while 12% (six cars) scored three stars or fewer.

This indicates manufacturers know how to build five-star cars, but the price of a vehicle appears to have significant bearing on how it performs in a crash test.

On the subject of the affordability of four and five-star cars, Avery said: “We’ve all got budgets that we have to work to, and you make the choice if you want a newish second hand car, or you want a brand-new car – that’s your choice. Our role is to tell the customer: you have a choice when it comes to safety.”

The Dacia Jogger is far from the being the only controversial result in Euro NCAP’s back-catalogue. We take a look at other notable examples.

Euro NCAP periodically retests cars that have been on sale for some time in order to gauge how they fare against updated crash-test criteria; this can often result in lower results in later tests, as while NCAP’s assessments have moved on, the vehicles themselves may not have done.

Matthew Avery said: “Let’s put it this way: You can have a Renault Zoe with zero stars…or you can buy the cheaper four-star electric Peugeot 208 EV.”

“Everything important in a pole impact happens in the first 40 milliseconds, or something like that. A door falling off when the pole and the car are separating afterwards is not really here or there, it’s not really part of the threat. It’s not great, it increases the risk of some sort of ejection, but I wouldn’t say that it’s catastrophic in the way that a lay person would.”

“Too old, and not kept up to date”, NCAP’s Aled Williams says of the Punto and Panda. He continues: “There are other car manufacturers who keep their models going for quite a long time, but they keep them up to date; they’ll update them with some AEB [autonomous emergency braking]… but those were cars that had been sold unchanged where safety is concerned in the marketplace for many many years.”

Euro NCAP has done a huge amount to improve vehicle safety in its 26 years. Its star-rating system is firmly lodged in drivers’ minds, while its unwavering focus on crash protection and prevention have undoubtedly helped accelerate the development of everything from crumple zones to autonomous emergency braking.

The organisation’s results may not always go down well with car makers, while some of the details of its tests are not straightforward for drivers to understand.

But Euro NCAP is happy to both openly publish its testing protocols online, and be challenged on its decisions. Such transparency can only be welcomed.