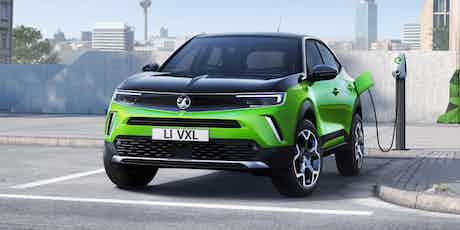 Vauxhall has revealed the new Mokka as a stylish new SUV that’ll be available with petrol and diesel engines or as a fully electric SUV with a 201-mile range.

This is the new Vauxhall Mokka – no don’t stop reading! This all-new crossover is nothing like the old Mokka X model – in fact, it might be one of the most exciting small SUVs coming this year. It’s on sale in Europe now and is set to arrive in the UK before 2021.

For a start, just look at it… You’d never believe it was made by the same company that produced the previous, rather forgettable-looking Mokka. That bluff front end with its super-slim headlights looks great and the wide intakes and angular chrome bumper trims make it one of the most eye-catching small SUVs around.

It’s not just a pretty face, though. The two-tone bodywork and chrome strip running over the roof make sure that the new Mokka doesn’t just look like a hatchback that’s been jacked up and given a set of big alloy wheels. It’s the same story ’round the back with a set of cool-looking down-turned pillars beside the windscreen and new flatter brake lights like the ones you’ll see on the latest Astra.

The old Vauxhall Mokka’s interior was neatly organised, but a bit dull. The new car’s cabin is going much more upmarket thanks to an infotainment system inspired by the dual-screen setup you get in the newest Mercedes models.

Sure, Vauxhall’s system doesn’t quite link the central touchscreen with the driver’s display quite as seamlessly as in a Mercedes, but it certainly has the likes of the Renault Captur, VW T-Roc and Skoda Kamiq licked. These pictures show the range-topping 12-inch driver’s display and 10-inch central touchscreen, but entry-level cars will come with a smaller 7-inch dashboard display.

As in almost all new cars, you’ll be able to get the Vauxhall Mokka with Apple CarPlay and Android Auto smartphone mirroring so you can use your phone’s navigation and media-streaming apps through the car’s built-in screens.

The new Vauxhall Mokka is 12.5cm shorter than the old car, so you’d expect it to be more cramped inside. Not so, because Vauxhall’s actually made the new Mokka 10mm wider and pushed its front and rear wheels apart by 2mm, so there’s actually a smidge more passenger space inside than before.

Boot space has taken a bit of a hit, but the new Mokka’s 350-litre load bay is only six litres shy of what you could pack in the old car. If you find yourself regularly moving large luggage, however, you’ll be better off with the Skoda Kamiq and its 400-litre boot.

Vauxhall has confirmed that you’ll be able to get the new Mokka with a range of petrol and diesel engines, but more exciting is an all-new electric car called the Mokka e. This pairs a 50kWh battery with a 136hp electric motor. This combo will power the new Mokka e at up to 93mph and for 201 miles between charges.

Speaking of which, Vauxhall has said you’ll be able to charge the Mokka e using a range of wall boxes and public chargers. The fastest way to recharge is to use a 100kW public fast charger, which can boost this electric car’s batteries from 0-80% fully charged in just half an hour. Vauxhall says you’ll be able to drive for around 200 miles on a full charge.

The new Vauxhall Mokka e is on sale now. The standard petrol-powered model costs from £20,735 while the Mokke e electric car will set you back from £30,840 – that’s taking into account the £3,000 Government plug-in car grant.

If you can’t wait for this new model, read our review of the outgoing Vauxhall Mokka X or check out the latest electric cars deals available through carwow.