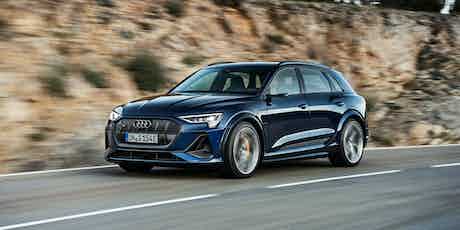 The new Audi e-tron S and e-tron S Sportback are the first sporty electric ‘S’ models it has made, and are among the first mainstream high-performance electric cars to rival the ferociously fast Tesla Model X.

The Audi e-tron S should have no trouble standing out from the regular e-tron thanks to a wider profile and a more aggressively designed front end with a few extra contours, larger air intakes and a gaping grille. These design features aren’t there for the sake of it – the car has been designed to be as aerodynamic as possible and the sizeable air intakes are there to help with cooling and airflow around the car.

The rear bumper has a large diffuser that extends almost across the entire car’s width. This, as well as the aluminium mirror caps and red S badges are exclusive to the new S models. Large parts of the body’s lower section can also be painted in a contrasting colour upon request.

You can also get the e-tron S equipped with Matrix LED headlights as an option. Audi says that each light is divided into 1.3 million pixels and can be controlled with great precision. In narrow roads, for example, it shows the car’s position in the lane and helps you to remain safely in the centre.

To fill the wider arches of this performance model, Audi has equipped the e-tron S with 21-inch wheels – though you can pay extra for optional 22-inch wheels instead. The brake calipers are painted black as standard and feature the S logo, but you can pay for them to be painted in bright orange and decorated with the e-tron logo.

The Audi e-tron S and Audi e-tron S Sportback interiors are exactly what you would expect from a premium car manufacturer; so dark colours and plush materials throughout. The dashboard and door trim inserts are finished in brushed aluminium as standard but a carbon fibre finish is optional, as is an ambient lighting package.

Electrically adjustable sport seats come as standard and can be finished in leather or a leather/Alcantara mix with embossed S logos.

The e-tron S and the Audi e-tron S Sportback are equipped with two large central touchscreens. On a third display, that hosts Audi’s virtual cockpit, the driver can select a special e-tron screen that moves the electric drive to centre stage. A further heads-up display is also an option.

The normal e-tron is only available with a 70kWh battery with a maximum driving range of 193 miles, but the beefed-up ‘S’ models come with a more substantial 95kWh battery. This means the e-tron S and e-tron S Sportback claim to be capable of up to 226.2 miles and 229.9 miles respectively between charges (WLTP figures).

Not only does the larger battery extend the range but it also significantly ups the performance. Three electric motors work together to offer an impressive 496hp and 973Nm of torque. Audi says the new S models are capable of reaching 0-60mph in an impressive 4.5 seconds and have a top speed of 130mph.

The low placement of the battery in the Audi e-tron S electric car allows for a low centre of gravity, which helps the car lean less in fast corners. Both the e-tron S and e-tron S Sportback come with air suspension that can adjust the height of the car by up to 76 millimeters depending on the driving situation and settings.

Both vehicles are equipped with electric torque vectoring with active and fully variable torque distribution on the rear axle to help send power to whichever wheel has the most grip.

Headroom and interior space may suffer as a result of its slinkier styling, but the e-tron S Sportback is set to cost a similar amount to the standard e-tron S. If you’re considering one of these models it will probably come down to your own personal taste.

Order books for these two performance models will open in Autumn 2020 with customer deliveries expected for 2021. The Audi e-tron S will be priced from £87,000 and the Audi e-tron S Sportback from £88,700.

Audi says customers that join the waiting list in 2020 will be offered a free 12-month subscription to the Audi e-tron charging network, which gives access to 18 different charge station providers. Free charging up to the value of £150 is included, as is a home wallbox for recharging your electric car.

Check out the latest carwow Audi e-tron deals or compare the newest offers on the best electric SUVs currently on sale.