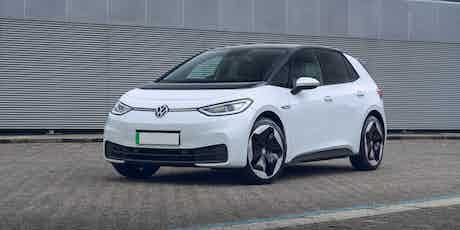 If you’re looking for a car that won’t cost a penny to tax, your options may seem limited. After all, almost every car on the road is now subject to paying VED — with just one category exempt.

If a car emits zero grams of CO2 per kilometer, it’s eligible for free road tax. This rules out petrol- and diesel-powered cars, leaving you with your pick of electric and hydrogen-powered cars.

Read on for the best tax-exempt cars you can buy now.

Driving a Tesla Model 3 can feel a little more like hopping into a UFO at first. With an interior practically devoid of buttons, Tesla’s minimalist cabin feels refreshingly different.

That’s backed up by cutting-edge technology, such as Tesla’s ‘Autopilot’ driver-assistance systems. Long Range cars come with up to 360 miles of range – more than enough for the daily commute, then. Oh, and you can buy one through carwow now…

If you’re looking for a practical yet efficient hatchback for your tax-exempt purchase, the Volkswagen ID3 is worth a look.

It’s about the size of a Golf but is more spacious inside (thanks to clever packing of its electric system) and comes loaded with kit — including a super-sharp 10-inch infotainment system. Versions with the largest battery come with 336 miles of claimed range, too.

Want something cheap to tax but ultra-cool? The Porsche Taycan is one of the most coveted cars to hit the market in the last few years, and for good reason.

This all-electric saloon is seriously fast, is great to drive and comes loaded to the brim with technology. It doesn’t quite match other EVs in its class for range, topping out at 301 miles, but it does support 270kW rapid charging for quick battery top-ups.

Few brands do sensible cars as well as Skoda, and that’s showcased well in its first electric car. The Skoda Enyaq is properly spacious, drives really well and has plenty of equipment on-board to keep tech-heads keen.

Granted, it’s not the most exciting car to look at but it comes with up to 333 miles of range (depending on your choice of battery) and it can carry loads of luggage in its 585-litre boot.

Even though the Kia e-Niro has been around for a while now, it’s still one of the best all-round EVs out there.

Its 282-mile range is very respectable for a car of its size and, being a Kia, it comes with a 7-year/100,000-mile warranty. The roomy interior is filled with soft-touch plastics and leather, so it feels really good to sit in too.

You’re sure to turn heads with the Peugeot e-208. This French hatchback is one of the best-looking cars to make it to the road in recent years and is just as smart under the skin.

Using many of the same electrical gubbins as the Peugeot e-208 makes the Vauxhall Corsa-e a seriously appealing car.

Its comparatively tame design can’t quite match the tres-chic Peugeot, but the Corsa’s interior feels rather plush and has a more conventional layout that may suit some drivers better.  The 10-inch touchscreen is easy to use and the Corsa-e is compatible with 100kW public fast chargers, but space in the back is a little tight.

A Ford Mustang that’s exempt from road tax? Ok, so it’s an electric SUV rather than a fire-breathing V8 muscle car, but it’s still one to get excited about.

The Mustang Mach-e takes the macho looks of the iconic pony and morphs them into a practical SUV shape. It’s loaded with technology too, like a huge portrait-set infotainment system, and drives very well for a high-riding family car.

The Mercedes EQC is one of the poshest cars you can get that’s also tax-exempt.

It looks pretty sleek and you’ll have plenty of room to stretch in its roomy, plush-feeling cabin. The Mercedes EQC’s 255-mile range isn’t as great as some equally upmarket electric SUVs, however.

Futuristic looks make the Hyundai Kona Electric stand out from the petrol- and diesel-powered SUV crowd and its head-turning capabilities are backed up by some impressive tech.

It’ll manage a respectable 279 miles on a charge in 64kWh guise, and supports 100kW fast charging. It gets a rather funky-looking interior that’s reasonably roomy, too.