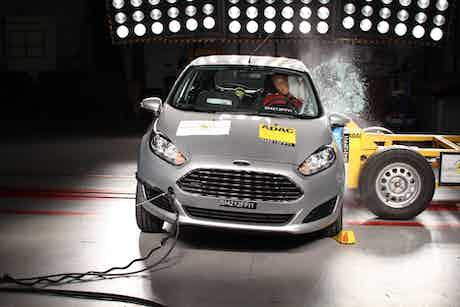 Safety is often a top priority for new car buyers. This means Euro NCAP’s testing regime is a vital source of information for anyone looking to pick the car that’s going to protect them the best. Since 1997, the organisation has smashed thousands of new cars in exhaustive tests to find out how well each fares – pushing up safety standard across the industry.

Many governments impose basic safety requirements cars must pass to be sold, but Euro NCAP’s tests are among the most stringent. Since its inception, it’s set the standard against which the overwhelming majority of new cars are rated. Every few years, Euro NCAP increases the mark to pass, making it harder and harder for manufacturers to get the coveted five-star safety rating. So how does it assess cars and what do the scores mean?

How does Euro NCAP test cars?

Euro NCAP relies on funding from various governments both in the UK and across the European Union to conduct its research. In general, cars are sourced in one of two ways – either a manufacturer will donate a car – usually before release, so a rating can be awarded before it goes on sale – or by simply buying a car from the manufacturer.

Each car is then tested and assigned a rating from one to five stars, across four categories – Adult Occupant, Child Occupant, Pedestrian and Safety Assist:

Our video, below, demonstrates the differences in safety between a car from the ’90s and a modern car:

Anything else worth bearing in mind?

Euro NCAP constantly strives to make new cars safer. As a result, its tests become more stringent almost every year. This means that a car that achieved a five-star rating back in 2012 might not score the same today, so it’s worth doing your research beforehand.