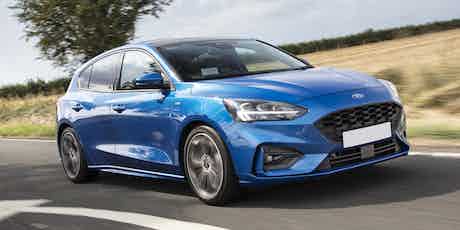 That popularity also means it’s imperative that you pick the right colour for your car. After all, with so many Ford Focuses to choose from on the used market, buyers can afford to be picky if they’re not fans of a particular paint job. Check out our full colour and price guide below to find the perfect Ford Focus paint finish for you.

It may be the no-cost colour option, but there’s more to Race Red’s appeal the fact it’s free. The bright tone helps the Focus stand out in traffic and accentuate its styling (especially on the sportier ST-Line trims), yet isn’t too vivid to put off used buyers. That brightness does mean it’ll need fairly frequent washes to keep it looking factory fresh, though.

Frozen White is another colour that will show up dirt and grime really easily, though there is sense in ticking the box for this shade. After all, white is a very safe and popular colour, which picking Frozen White means you’re less likely to turn away used buyers when you sell the car on. Handily, Frozen White is available across the Ford Focus range – and, as an extra sweetener, if you opt for the Vignale version, it’s a no-cost option on that particular trim.

Another safe colour option is Agate Black. While it shows up dirt and grime even more than the previously mentioned colours, it is a smart-looking and inoffensive shade that contrasts nicely with the car’s silver trim pieces. Agate Black is available across most of the Ford Focus range, too (only the Active version goes without it) – and, as with many of Ford’s other colour options, it’s slightly cheaper on the range-topping Vignale version.

The first of three blue colours you can spec on the Ford Focus, Chrome Blue is quite a quirky shade to find on a family hatchback – depending on the lighting, it can at times look more like a teal green than a hue of blue. That should mean it’ll do a decent job at disguising dirt, though, as well as being dark enough to not turn off too many used buyers. Much like the no cost Race Red colour, Chrome Blue is available on every Ford Focus trim bar Vignale.

Silvers tend to be quite popular with new car buyers, so it’s a bit surprising to see the only shade offered on the Ford Focus is Moondust Silver. Because silvers are also popular with used car buyers, it means selling the Ford on should be easy if you spec this colour. Do bear in mind, though, that the bright finish means it shows up dirt very easily.

Fancy picking blue for your new Ford Focus, but want something more vibrant than Chrome Blue? Then you’ll likely be a fan of this bold and distinctive shade that Ford calls Desert Island Blue. It’s not as widely available as other colour options on the Ford Focus, though, as Desert Island Blue is only offered on the Titanium and ST-Line trims.

Being a dark grey, Magnetic is far from being the most exciting colour you can have the Ford Focus painting in. That said, it is a colour that won’t put off many used buyers, and the dark tone means it does a very good job at hiding any dirt and grime that’s built upon the bodywork. Like Frozen White, Magnetic is also a colour you can specify on the Ford Focus irrespective of trim level.

>/div>
Metropolis White is a slightly fancier shade than the Frozen White colour you can spec on the Ford Focus. Whereas Frozen White has an appropriately cooler hue, there’s a creamy tinge to the finish you see here. It is a little bit pricier to spec, though, and do also bear in mind it’s only available on the higher-riding Focus Active model.

Let us help you find your next car

Of the three blue paint finishes on the Ford Focus, Blue Panther is the one worth considering if you’re looking for something subtle. Plus, being a darker shade means this hue of blue is a smart-looking colour that contrasts nicely with the car’s lighter-coloured trim pieces, and it’s also good at hiding dirt. Do bear in mind, though, that it’s also one of the most expensive colours you can spec on the Ford Focus.

At a blink-and-you’ll-miss-it glance, Fantastic Red may not look that much different to the no cost Race Red colour. Take a closer look, though, and you’ll see the former shade has a deeper and richer finish, which helps make an already vibrant colour pop even more. Picking this colour will cost you a bit, though, and the fact it’s bright red also means it shows up road grime really easily.