Which cars do the world’s top 10 billionaires drive? 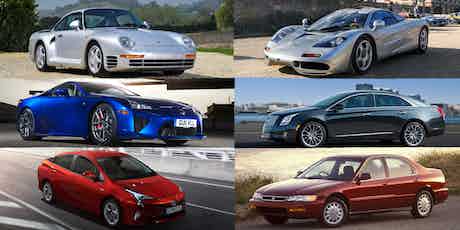 ‘If I ever win the lottery, what car will I buy?’ is a question we’ve all thought to ourselves at some point.

For some, it’s an all-out spending spree for the most lavish and luxurious ones you can get your hands on, while others may fancy a collection of classic and rare cars to preserve until time’s end. Some of you might just fancy something sort of nice and comfy, and there’s no shame in that.

But what do the rich-rich people really buy? The kind that have more money than you could even think of what to do with? Well, read on to find out which cars the world’s top 10 billionaires have spent their fortunes on…

The world’s richest man is Jeff Bezos, and that’s not really surprising if you know he is the man behind Amazon. His riches come from those questionable purchases you made because of free next-day delivery with your Prime account.

If you want a slice of the Bezos lifestyle, get behind the wheel of an old Honda Accord. It was what he drove around in when he first made it as a billionaire back in the ‘90s — though it’s no guarantee you’ll see the same riches by getting behind the wheel.

Real-life Bond villain Elon Musk is responsible for Tesla, that electric car company you might have heard of recently.

He originally made his billions creating PayPal among other businesses, and has spent his money on some interesting cars over the years. Not only has he owned a McLaren F1, but Musk bought *that* Lotus Esprit from the Bond film The Spy Who Loved Me for almost £600,000.

It’s not getting tucked away under covers forever though — Musk wants to turn it into a proper submarine. Almost as mad as his planned missions to Mars…

Picture this — you’re the boss of the largest luxury goods company in the world, appeasing the rich with brands like Moet and Louis Vitton. You’re going to want a luxurious car to match, right?

Well, if you’re Bernard Arnault, you might not be too bothered about it. Sure, the BMW 760Li he’s recently been spotted in is a nice car — but it’s one that predates 2015, which doesn’t exactly scream being at the cutting-edge of the fashion industry. Each to their own.

Microsoft founder Bill Gates was once quite famously the world’s richest man, though he’s humbly slipped down to fourth on that list in recent years. The shame.

Still, with a net worth of £91 billion, he’s not exactly short of cash — and that’s reflected in his taste of cars.

Most notable is his Porsche 959, which he bought brand-new in the ‘80s. America has a law that makes it illegal to import cars under 25 years old that haven’t been certified for release on that side of the Atlantic there — meaning Gates couldn’t smuggle his into the country.

It sat impounded for over a decade before he managed to finally get access to it, with the creation of a ‘Show and Display’ rule that meant cars could be allowed in if they covered under 2,500 miles a year.

He may look like an android wearing human skin as a costume at times, but Mark Zuckerberg knows how to make an emotional purchase.

The man who founded Facebook has a rather special car in the Italian, twin-turbocharged V12 Pagani Huayra.

Cool, right? Well, you’d hope he’d use his £73 billion net worth to buy something more exciting than the Honda Jazz he’s been spotted driving around in on occasion.

Warren Buffett is pretty famous for making his billions on Wall Street with some seriously savvy investments, and a keen eye for when and when not to spend cash.

Evidently, he’s not spending much of his £69 billion net worth on cars though, with the most interesting car he’s known to have owned a Cadillac XTS.

We’d be cheating a little normally putting two people together under one number, but there’s a very good reason for this.

Larry Page and Sergey Bring both have the small claim of founding Google to their names, but their similarities don’t end there. Whether purposeful or not, both have had identical cars in the past — namely a Tesla Roadster and a Toyota Prius each.

Might be worth using their own creation to search for something a bit different, eh?

Larry Elisson made his billions by founding computer company Oracle, and has found himself worth more than £65 billion as a result.

A reasonable amount of that cash has been sunk into a tasty car collection — which has included a McLaren F1 and a Lexus LFA.

For the daily commute though, he’s opted to go for a Lexus LS600h which, though very sensible, seems like the boring choice of Lexus to take out in a morning…

Asia’s richest man, Mukesh Ambani, is worth more than £59 billion — and he doesn’t really hide that fact.

He has a fleet of cars that includes Rolls-Royces, Aston Martins and BMWs among other, though one of them stands out from the rest.

His wife once bought him a completely personalised Maybach 62 as a birthday present. Seems like a pretty apt gift for a man who has everything.

Amancio Ortega is a pretty private figure — he’s only ever given three interviews throughout his life. Doesn’t seem like a man who has companies like Zara under his belt and is worth £58 billion, does it?

Ortega’s desire to keep himself very much to himself means he’s rarely spotted in anything overly flash but has been spotted about in an Audi A8 and Mercedes GL on occasion.