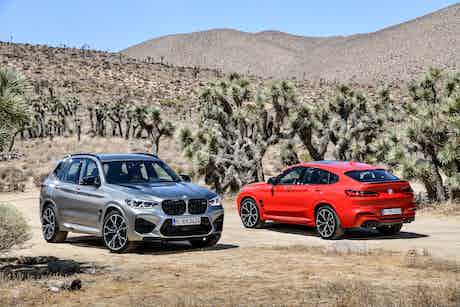 Full information has been revealed for the BMW X3 M Competition and its sleeker X4 M Competition sister – sensible family SUVs boasting 510hp and a 0-62mph time of just 4.1 seconds. The cars have been revealed ahead of their public launch at the Geneva motor show next month.

There’s no need for you to worry that your X3 M Competition or X4 M Competition will get mistaken for a standard BMW SUV because both models come equipped with an aggressive body kit that makes them look suitably moody.

That includes gaping intakes at the front of the car that channel air to its radiators, side skirts and a large diffuser-style rear bumper. You also get M-specific wing mirrors and gills behind the front wheels. Competition models, meanwhile, can be spotted by their high-gloss black grille and roof spoiler. The look’s completed with huge alloy wheels – 20-inch on standard cars, 21-inch on Competition versions.

You can have your X3 M Competition or X4 MCompetition finished in a choice of seven colours including Toronto Red and Donington Grey metallics.

The BMW X3 M Competition and X4 M Competition get the same twin-turbocharged 3.0-litre straight-six engine that’s destined for the new M3 super saloon. Producing 510hp and 599Nm of torque – it’s enough to rocket both cars from 0-62mph in just 4.2 seconds. That said, a Mercedes-AMG GLC 63 S is even quicker – it gets from 0-62mph in just 3.8 seconds thanks to its 510hp and 700Nm of V8 torque.

The BMWs are limited to 155mph but, if you pay extra for the M Driver Package, that can be raised to 177mph.

As standard both SUVs come with an adjustable sports exhaust that gets louder as you progress through the various drive select modes – from Comfort to Sport and Sport+. An M Sport exhaust that, BMW says, gives the cars’ exhausts a ‘pleasingly sonorous timbre’ comes as standard in the UK. A new feature for BMW is the quiet mode that, at the touch of a button, hushes the exhaust for early morning starts when you don’t want to wake the entire street.

The BMW X3 M Competition and X4 M Competition’s rocket-sledge acceleration isn’t just down to their turbocharged engine – they also get an M xDrive four-wheel-drive system that’s all about making the car more fun (and faster) to drive on Tarmac. It sends its power to the back wheels – allowing you to lean on the rear-limited slip differential for corner exit traction – before pushing power to the front wheels to pull you out of drifts when things get a little too lairy.

If lairy is what you want, however, just stick either of the cars in M Dynamic Mode and the four-wheel drive system will shift even more power to the back wheels for controlled drifts and ‘particularly playful handling’. In a near 2.5 ton SUV? Who said the Germans don’t have a sense of humour…

Like the four-wheel drive, which should ensure you’re not stranded by an inch of snow like most (rear-wheel drive) BMWs, the X3 M Competition and X4 M Competition get an eight-speed automatic gearbox that makes stop-start driving as painless as possible.

That said, it’s also been engineered with fun in mind and you get steering-wheel-mounted paddles that let you quickly drop down the gears in Manual mode for engine braking as you approach a corner. Stamp on the accelerator and, according to BMW, the ‘lock up’ function means there’s no pause before the car accelerates and it’ll hold onto gears – even hitting the rev limiter without changing up – to give you complete control of the car.

On top of this, you get three settings – Drivelogic mode 1, 2 and 3 – that progressively dials out smooth gear changes in favour of quicker shifts.

The BMW X3 M Competition and X4 M Competition get body stiffening comparable to rigour mortis to get the best out of the cars’ adjustable sports suspension. As a result, you get a strut brace (in carbon fibre if you’re willing to pay extra) across the front suspension mounts, stiffening in the bulkhead behind the engine and more stiffening under the floor of the rear of the car.

To the stiffened chassis, BMW fits suspension that is unique to the M cars, which includes electronically controlled dampers that let you choose from Comfort, Sport and Sport+ settings. The latter of which is so stiff even BMW recommends it for track use, only.

In combination with the specifically tuned suspension, you get specially tuned steering. It combines speed-sensitive assistance – which weighs up the wheel for better feel at speed – with a variable ratio system. It makes the car more stable at speed and quicker to react in tight corners.

The icing on the cake comes in the form of M Compound brakes. You get large four-piston callipers up front that clamp the drilled and ventilated 15-inch discs – that’s bigger than the wheels on most city cars. The single-piston callipers at the back sound less impressive. It’s also worth noting that the Porsche Macan has six-piston callipers and can be specified optionally with carbon-ceramic discs.

Both SUVs get leather seats that can be had in either black or bi-colour finishes. And, if you really want to spend your money making your expensive BMW interior looking horrible, you can pay extra to have the cabin in Midrand beige/black – seen here.

The BMW X3M Competition and X4M Competition come as standard with BMW’s top-of-the-range ConnectedDrive 10.25-inch infotainment screen that can route around traffic jams and find you a parking space as you approach your destination. It can be operated either directly using the touchscreen or via the iDrive control that sits between the two front seats, which makes it much easier to concentrate on the road ahead. The system will also understand hand gestures – a bit of a novelty – or you can control it (much more reliably) through the clever voice activation system.

In addition to the infotainment, standard equipment includes LED headlights, all-round parking sensors, cruise control and electrically adjustable heated front seats. You also get automatic emergency brakes and cruise control, but if you want autonomous driving aids – that mean the BMWs can drive themselves on the motorway and in heavy traffic – you’ll have to pay extra.

The beauty of these performance SUVs is that they’re just as practical as the standard cars they’re based upon. In the case of the X3 M, that means you get loads of space for four people and a 550-litre boot that’ll happily swallow several suitcases. The X4 M, meanwhile, sacrifices a little rear headroom because of its slinky roof, while the 500-litre boot is only marginally smaller.

And if that mix of performance and practicality sounds like exactly what you’re looking for, the cars are on sale now starting from £77,000 for an X3 M Competition rising to £80,000 for the X4 M.