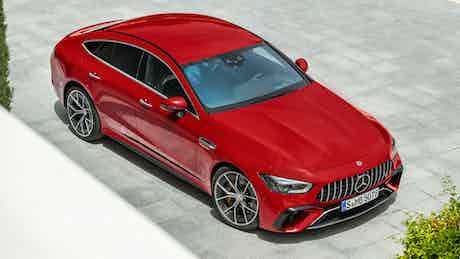 The new Mercedes-AMG GT 63 S E Performance is now on sale, with prices starting from £173,655. Read on for full details.

Forget the impractically long name for a second, because this ludicrous 843hp hybrid is the most powerful AMG road car of all time. It looks like the Audi RS7, Porsche Panamera and the BMW M8 Gran Coupe Competition have plenty of sleepless nights ahead…

You can order your new Mercedes-AMG GT 63 S E Performance right now. Well, as long as you have at least £173,655 lying around…

This range-topping model is suitably high-spec. For example, it comes with a more sophisticated adaptive suspension system as well as carbon-ceramic brakes as standard that you won’t find on the ‘normal’ AMG GT 63 S.

Read all about the AMG GT 4-door

20-inch wheels come as standard, with the option for 21-inch units if you fancy.

Order your GT 63 S E Performance now and you’ll be in line to take delivery from April.

The new GT 4-door hybrid looks very similar to the standard GT 63 S. The only real difference at the front is in the new vertical, rather than horizontal, bars within the air intakes under the headlights.

Somebody really earnt their designer’s turtle-neck jumper that day, didn’t they?

Ok, so you do get some new 20- or 21-inch alloy wheels, there’s a tiny red ‘E Performance’ badge on each side and a new charging flap in the rear bumper, but these are all small tweaks in the grand scheme of things…

AMG has built a few hybrid cars before – such as the AMG GLE 53 and E53 models – but these are just mild hybrids that use a small motor to give the engine some help when you accelerate.

Together, this new hybrid system produces 843hp and a colossal 1,470Nm of torque.

This makes it the most powerful road car AMG has ever built – and it’s also one of the quickest. The AMG GT 4-door hybrid accelerates from 0-60mph in just 2.9 seconds.

That’s a few tenths of a second quicker than the standard GT 63 S, a Porsche Panamera Turbo S or a BMW M8 Gran Coupe Competition.

The new AMG GT hybrid comes with a 6.1kWh battery that Mercedes says took inspiration from the batteries in its Formula One cars.

Putting the technical talk to one side, this makes it lighter than most batteries with the same capacity and it has some clever cooling technology that helps it deliver lots of power in a short burst without overheating.

So how much range do you think it has? 25 miles? Maybe 15 miles? Nope – a full charge gives the new GT 4-door hybrid just seven miles of range.

At least it’ll do 80mph in EV-only mode, though, and 7 miles of range is probably enough to get you to a nice quiet back road where you can fire up the twin-turbo V8…

This new E Performance model comes with the same 9-speed multi-clutch gearbox as the standard AMG GT 4-door. However, AMG has added another 2-speed gearbox – just for the electric motor.

This works in a similar way to the two-speed ‘box you get in a Porsche Taycan and an Audi e-tron GT. The motor uses a lower gear when you launch the car or accelerate hard but it shifts into a higher gear when you’re cruising around to stop the motor over-revving and to help it use less electrical energy.

This is all done automatically, even if you have the normal 9-speed gearbox in manual mode.

If you thought the new 4-door hybrid’s exterior changes were hard to spot, wait until you get inside – it looks almost exactly the same as the regular car.

You get the same sweeping dashboard and raised centre console with buttons laid out to look like cylinders in a V8 engine. The steering wheel has a new design with some thinner spokes, but that’s the only real change.

The dual-screen infotainment system is mostly the same, too – although it has some new graphics and extra menus that let you control the car’s hybrid system.

The new AMG GT 4-door hybrid comes with the same driving modes as the regular car, including Comfort, Sport, Sport+, Race and Individual. However, there’s also a new ‘Electric’ setting that leaves the twin-turbo V8 switched off, so you can cruise around at 5am without annoying your neighbours.

It does play fake engine sounds through the cabin speakers when you switch the ignition on, though – if you’re into that sort of thing.

AMG has also kept the standard car’s Drift Mode, which should prove even more effective thanks to the hybrid system’s extra 204hp.

You can customise the strength of this regen effect using buttons on the steering wheel. Level zero turns the system off completely, while Level 3 cranks it up so high that you can pretty much drive the car using just the accelerator pedal.

Race mode automatically sets the regen to Level 1, which is supposed to feel the most like driving a normal car, and this new GT 4-door hybrid can also use its limited-slip differential and the motor’s regenerative braking to help stabilise itself in certain corners without the ESP system applying the brakes.

Keen on a new Mercedes? Take a look at the latest offers on the brand’s model or compare other saloon cars.