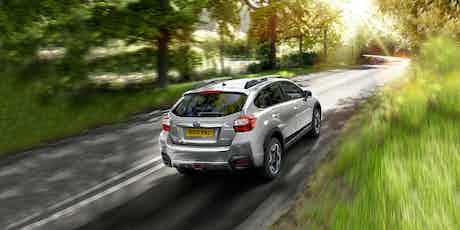 Subaru has announced a range of updates for the XV SUV including a refreshed interior, a new infotainment system and improved ride quality

The compact SUV class is fairly crowded right now, and Subaru’s XV has struggled to get noticed next to the Nissan Qashqai and Mazda CX-5. Subaru is aiming to reverse this trend with a package of updates designed to improve the XV inside and out.

If you like the look of this rugged runabout, choose your ideal Subaru XV in our car configurator to see how much carwow could help you save. Alternatively, read our list of the best crossovers to see the XV’s competition.

Although visual differences in the new interior are hard to spot, the overall quality is said to have been improved. New piano black and metallic elements have been introduced on the dashboard, switchgear and centre console, while the front passenger can now control the infotainment system using the repositioned buttons.

The instruments have been redesigned with a cool blue glow to make them look more modern and upmarket. An extra USB port means you can listen to music from one device while charging another. Beverage fans will appreciate the redesigned cupholders, which now have a sliding cover to hide them away.

All Subaru XVs now sat-nav and an infotainment screen as standard. This new system can be controlled using buttons or the seven-inch touchscreen which, when navigating, allows smartphone-style pinches and swipes to move around the map. A standard-fit reversing camera makes parking much easier.

Owners can download a variety of apps on their phone that link with the car’s screen to provide weather and traffic reports, audio streaming, news bulletins or a calendar. Finally, a voice control function lets the driver control the car’s functions without taking his or her eyes off the road.

The XV has always offered great stability thanks to its lowest-in-class centre of gravity and the brand has sought to improve this trait for the new model. Changes to dampers mean it’s both more comfortable and more resistant to body roll while modified springs better force the tyres into the road surface.

The steering has been quickened by 10 per cent and its response has been made more linear, which means the car is keener to turn in to corners and more predictable when doing so. The front bracing has also been stiffened to keep the car stable in corners.

Thicker sound insulation has been fitted to the bonnet, floor, doors and windows to suppress outside sounds at motorways speeds. In addition, the underside of the body has been smoothed to create less wind noise and improve its aerodynamic efficiency.

Collectively, the changes made to the car’s soundproofing mean it’s now one decibel quieter at speed than the previous version, making this a much nicer proposition for long motorway journeys.

Despite the improved ride, refinement and increased specification, the XV still costs from £21,995. This is fairly expensive compared to an entry-level Nissan Qashqai or Suzuki Vitara but makes up for it with higher standard equipment levels.

If you’re taken with its tough image and comprehensive equipment list, put the Subaru XV in our car configurator to see how much carwow could help you save. For more options, head over to our deals page or, if you’re still struggling to pick what car you’d like, check out our car chooser.