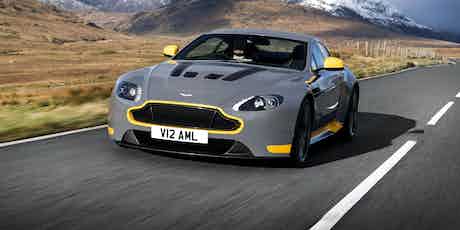 Aston Martin has released details of the upcoming V12 Vantage S with a seven-speed manual gearbox. Read our complete guide to find out more…

Aston Martin has answered the prayers of many driving enthusiasts with a manual gearbox version of its V12 Vantage S supercar.

Read our list of the best cars with manual gearboxes currently on sale and spec your perfect car using our car configurator – you’ll get a great selection of offers from our hand-picked network of dealers.

The V12 Vantage S will be available with a seven-speed manual gearbox in a ‘dog-leg’ configuration. This design moves first gear from its traditional top-left location, to bottom left because gears two through seven are more commonly used. Each subsequent gear has been moved one position ahead on the conventional ‘H’ pattern gear lever, as shown by the image below.

This layout means the most frequently used gears are closer together, requiring fewer diagonal gear changes. It might seem like a bit of a dinosaur compared to high-tech competition from the likes of the Nissan GTR, but a manual V12 Vantage with a dog-leg gearbox is likely to be welcomed by purists and enthusiasts alike.

The new manual V12 Vantage S will feature a new ‘AMSHIFT’ system. This automatically ‘blips’ the throttle when the driver shifts to a lower gear, making the change much smoother – similar to modern DSG double-clutch gearboxes. An additional benefit is its ability to minimise the harsh punch of full-throttle up-shifts.

This seven-speed manual gearbox will be offered as a no-cost option on the standard V12 Vantage S. The engine, suspension, interior and styling are identical to the automatic version, the only visible difference being a new gear lever.

This new manual V12 Vantage S, along with the rest of the Vantage range, will come with an upgraded infotainment system that features iPhone connectivity via Apple CarPlay integration. The first deliveries are scheduled to begin in the third quarter of 2016.

If you’re after a super-fast sports car, read our list of the best supercars on sale now. Our car configurator tool can help you get a great deal on your next new car, while our car chooser and deals pages are here to help if you can’t decide what to buy.