News Dyson electric car: specs, features and why it won’t go on sale

Dyson electric car: specs, features and why it won’t go on sale 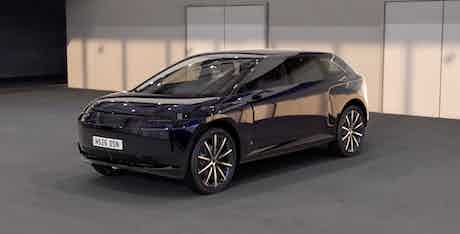 Dyson may have pulled the plug on its electric car programme, but that hasn’t stopped the company from revealing the luxury SUV it was planning to make.

Sir James Dyson announced last year that his company was scrapping its plans to build an electric car. The company had invested hundreds of millions of pounds in getting the project up and running, and its first EV, a Range Rover-sized alternative to the Tesla Model X, was due to go on sale in 2021.

Recently Dyson revealed more about the car, its features and design. Here’s what you need to know.

The tech industry is no stranger to the principles of minimalist design, so it’s not too surprising that Dyson didn’t have a fussy shape in mind for its first car.

With no big grille needed to feed air to a combustion engine, the most distinctive features on the Dyson’s front are its slim headlights and the narrow air intakes. Likewise, the only flourishes down the flanks of the car are the curved bodywork creases that orbit the car’s wheel arches.

The car’s sleek shape has been further helped out by Dyson ditching conventional door mirrors. In their place are stalks with rear-facing cameras, which would have provided video feeds to a pair of screens on the car’s doors.

Much like the exterior, Dyson had a very uncluttered cabin in mind for its electric SUV. The seats are perhaps the most striking feature, with Dyson saying he wanted to move away from the ‘1930s armchairs’ cars today have.

“We wanted a more elegant, structural seat, with well-considered posture support,” he said. “When you sit in this, it gives you that support in all the right areas. The car has three rows of seats, capable of seating seven adults in comfort.”

Much like the Tesla Model X, there are few physical buttons to speak of in the cabin, and there’s a large digital display mounted on the dashboard.

Unlike the Tesla, though, the screen isn’t a gargantuan item that’s used to operate all the features in the car. Instead, Dyson wanted the controls to be on the steering wheel – meaning, in company founder James Dyson’s own words, “there are no things to fiddle around with and distract you” while you’re driving.

What exactly those things would remain to be seen, as Dyson hasn’t confirmed what tech the final production car would have come with. Based on what the renders show, though, it seems the electric SUV would have been available with dual-zone climate control, heated and ventilated front seats and a wireless phone recharging tray.

It seems the Dyson electric car was intended to be comfy to drive rather than sporty. According to Dyson, the electric SUV was meant to ride on huge 24-inch wheels (not even the Rolls-Royce Phantom luxury limo has wheels that big). This, the company claims, would have improved the ride quality and allowed it to ride “more easily” over potholes and speed bumps.

Don’t go thinking that means it would be a wallowy barge of a car, mind, as Dyson reckons positioning the wheels at the corner of the car brought about “unexpected advantages” in road holding and stability.

Dyson’s being even more cryptic with some of the details regarding the powertrain it had planned for its electric SUV. For instance, very little has been flat out confirmed about the electric motor that would have propelled this seven-seater SUV, other than it was a unit of Dyson’s own design and the production-ready car would come with two – one powering the front wheels; the other the rear.

While Dyson hasn’t revealed many details on the electric SUV’s battery specs, it has confirmed the car’s battery pack compartment was designed with multiple battery pack sizes in mind – with the largest, it’s understood, allowing a single-charge range of up to 600 miles.

A more planted driving feel wasn’t the only benefit of that skateboard-style wheel placement: according to Dyson, it also helped free up interior space. Factor in its Range Rover-beating length of five metres, and it’s no surprise Dyson reckons its electric SUV has enough space for up to seven adults to sit comfortably. The fabric-trimmed seats are said to offer “well-considered posture support”, too.

Why Dyson electric car won’t be made

In a long blog post, Dyson explained the reasons why he pulled the plug on his £500 million car-making venture.

“We put together an exceptional team, built world-class facilities, and developed a radical car which was loaded with technology. We solved lots of problems that are traditionally associated with electric vehicles and together the team made great progress and delivered a car which was ready for production.

“Dieselgate changed everything because all automotive manufacturers had no choice but to shift to electric – almost overnight. Electric cars are considerably more expensive to make and manufacturers are making big losses on the sale of each car. These losses matter less to them because the sales of electric cars allow them to offset against selling traditional vehicles on which they make a good profit. As a technology-based car – being developed by a non-automotive company – we realised that our car was suddenly no-longer commercially viable.

“It was a difficult decision to stop, because hundreds of engineers, scientists and designers, had poured everything into the project and it was a great engineering achievement. But I have no regrets about having started the programme. We learned a lot and Dyson has benefited from a huge influx of engineering talent from the automotive industry – it has quickly been applied in other areas of our research and development.”

All your electric car questions answered