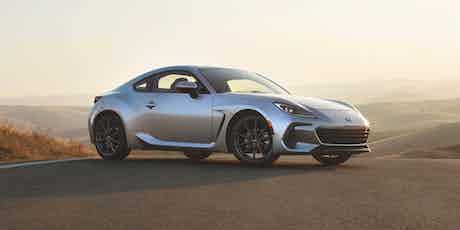 The new Subaru BRZ sports car has been revealed. Read on for full details on this car, which is also expected to be offered with a Toyota badge as a new GT86.

The old Subaru BRZ was a fantastic little sportscar – the only real complaint being that it could do with a bit more power. Well, Subaru must have been listening, because the new car comes with a beefier 2.4-litre flat-four boxer engine with 228hp and 250Nm of torque. That’s 28hp and 50Nm more than the old car could muster from its 2.0-litre engine.

As before, this power is sent through a six-speed manual gearbox to the rear wheels – although you will be able to get the new Subaru BRZ with a six-speed automatic gearbox if you prefer.

The new car features a similar silhouette to the outgoing version with a set of curvier bumpers front and rear. The headlights and brake lights are also new, and there’s now a large air vent in front of both doors.

Subaru’s changed plenty under the skin, too, because the new BRZ is up to 60% stiffer than the old car, which will help it make better use of its sporty suspension setup.

Inside, you’ll spot an 8.0-inch touchscreen infotainment system with Android Auto and Apple CarPlay smartphone mirroring and a new 7.0-inch digital driver’s display instead of the old car’s analogue dials.

The new cabin layout features plenty of straight horizontal and vertical lines, instead of the old car’s cuvier design. As before, you get a pair of supportive sports seats with the obligatory red stitching – it is supposed to be a sports car after all.

Subaru hasn’t announced how much the new car will cost, but it isn’t expected to go on sale in the UK. Ever-tightening European emissions regulations make it increasingly difficult for out-an-out sportscars to be sold here.

Read our in-depth Subaru BRZ review for all the details on the outgoing car, or click the green button below for help choosing which car to buy.

Get help choosing which car to buy