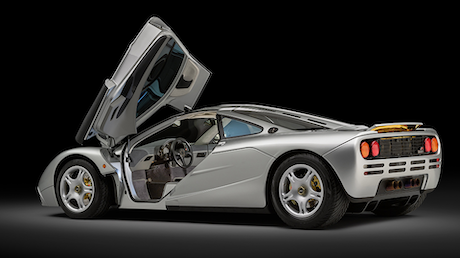 In a decade when the PlayStation burst onto the scene, most of us carried Pogs in our pockets and frosted tips were an acceptable fashion statement, car manufacturers were pumping out some truly bonkers cars.

New technology was beginning to take cars to a whole new level of performance, yet you could still easily find machines focused on pure driving pleasure.

With a rich pool of seriously cool cars to pick from, here is a handful of some of the best cars of the ‘90s.

Few cars have stood the test of time like the McLaren F1. Introduced in 1992, this was the brainchild of Gordon Murray — the man behind much of McLaren’s Formula One success in the late ‘80s and early ‘90s.

The F1 was supposed to be the ultimate road car — a three-seat supercar designed to put the driver first. It’s fair to say Murray managed this, but what the F1 is arguably most famous for was an unexpected side effect.

Thanks to its sleek design the McLaren F1 was able to cut through the air with ease. Combined with its powerful 6.1-litre BMW V12 engine, it would hit a recorded top speed of 240.1mph to make it the fastest production car at that time.

It’s still the fastest naturally-aspirated production car ever made — a record that’s unlikely to ever be broken.

When ‘Godzilla’ arrived with the R32 Nissan Skyline GT-R, an instant motorsport-proven, supercar-killing legend was born.

It was the final Skyline GT-R, the R34, that best summed up the famous sports car though. Introduced in 1999, meaning it just sneaks into this list, it packed everything made the GT-R into a greatest hits form.

Its 2.6-litre straight-six RB26 engine was now producing about 330hp (though officially this was 276hp, as Japanese manufacturers agreed not to go higher at the time). This, coupled with the most advanced form of the GT-Rs clever electronic torque-splitting AWD system meant the R34 could keep up with the Ferrari F355 and Porsche 911 Turbo, yet cost half as much as either.

That said, if you want one now, be prepared to spend way more than you would on either of those cars today…

The 1990s was a time when car technology was rapidly evolving. Active aerodynamics were beginning to appear, traction control systems were smartening up and electronic safety systems were becoming more common-place.

What if you wanted a raw experience though? Well, the Dodge Viper RT/10 had you covered.

Inspired by the Shelby Cobra, it used a Lamborghini-tuned V10 engine based on one from a truck sitting at the nose of a steel chassis. The bodywork was made of fibreglass, and your only assistance was your skill.

It had no anti-lock brakes and no traction control, plus luxuries were scarce. You didn’t even get door handles — you’d need to unzip (yes, seriously) the vinyl windows to open the doors from inside.

What the Viper lacked in amenities, it more than made up for in a hardcore driving experience. This was more of an extension of your limbs than a car, delivering both an enthralling yet terrifying experience — and one you had to respect.

Before Lamborghini was bought by Audi and became a (bit) more mature, it was truly bonkers.

The Diablo was the last car it produced as a Chrysler-owned manufacturer and had tough boots to fill in the form of the legendary Countach. Arguably, it never managed that — and didn’t quite hit the heights of the Murcielago that came afterwards.

But it remained a true Lamborghini. It was powered by a ferocious 5.7-litre V12 at launch, allowing it to be the second production car (behind the Ferrari F40) to hit 200mph while looking wild at any speed.

It was far from the perfect supercar. It was heavy, felt cobbled together and couldn’t quite match the raw pace of other manufacturers supercars to follow.

But its loud design and violent engine gave it a character like no other. And would it be a real Lamborghini if it wasn’t flawed?

Ok so the Ruf CTR2 is essentially that, but there’s much more to this ‘90s hero than being a tuned Porsche.

If you’re not familiar with Ruf, it’s recognised as an independent manufacturer but essentially strips bare Porsche before stuffing them with its own mechanical bits.

In the case of the CTR2, this meant a 993-generation 911 packed with a 3.6-litre twin-turbo flat-six engine based on the one used in the Porsche 962C Le Mans racer.

One of the best rules of the ‘90s was the need for a road-going version of your rally car if you wanted to go racing in WRC.

Born from this was a slew of heavily-turbocharged, fire-breathing monsters with licence plates. Amongst the absolute best of those is the Ford Escort RS Cosworth.

It wasn’t exactly quiet about its credentials. Sure, it was an Escort — but it was beefed up with aggressive aerodynamics including an iconic whale-tale spoiler.

Powering it was a 2.0-litre engine with an uprated turbocharger slapped on, allowing for an at-the-time healthy 230hp.

Because of the turbo lag though, its power would be delivered high in the rev range like a swing from the hammer of Thor directly to your backside. Plus it was matched by a seriously entertaining experience through corners.

The Renault Clio Williams may be a niche pick, but it’s one of the most desirable hot hatches ever produced.

Renault needed something in the early ‘90s to compete with the all-conquering Peugeot 205 GTI. Despite the name though, it wasn’t the craft of the Williams F1 team that did this.

Rather, its in-house Renault Sport division (you might be familiar with them) worked heavily on the then range-topping 16v. It borrowed suspension bits from its Clio Cup race car, modifying the bodywork and shoehorning in a larger 2.0-litre engine.

The result was a car that, when driven normally, was as docile as any regular Clio. Push it though, and it was one of the most engaging drivers’ cars of the ‘90s.

No, seriously, the hybrid Honda Insight was one of the coolest cars to come out of the ‘90s.

You see, the Toyota Prius was the figurehead of the hybrid at the time — seen as an efficient, though dreary, alternative to conventional petrol cars. In contrast, the Honda Insight was the car they told the Prius not to worry about.

Rather than style it like a box, Honda opted to make the original Insight look like a spaceship. Sure, this helped fuel the economy, but it created a genuinely head-turning coupe as a result.

Everything was designed to eek that last mile of fuel. It was just a two-seater — ideal for those single big-city commuters — which contributed to a total weight of just over 830kg.

This was a demonstration of Honda’s engineering capabilities rather than to be just another low-cost saloon. It may not appease the traditional car enthusiast, but it was a groundbreaker that’s sure to be a collector’s item in years to come.

Long before the Porsche Panamera Sport Turismo, the German legend had produced an estate car. Just not one with its name on it.

Audi wanted a slice of the emerging fast estate pie, but it didn’t have the expertise yet for such a car. It would ship off Audi 80 body shells to Porsche, which would then take care of the rest.

Check out the best estate cars on sale

The Audi RS2 would borrow a load of mechanical bits from the Porsche 968 Clubsport — a bonafide sports car — with the 2.2-litre five-cylinder engine modified to produce 315hp.

It would then be shipped off to dealers with an Audi badge on it, before becoming a cult classic.

The Lotus Carlton was such a fast car, that the possibility of it being banned was once discussed in UK parliament.

Similar to the RS2 story, Vauxhall wanted an ultra-fast saloon to compete with the BMW M5 and Mercedes 500E.

It shipped off its regular Carlton to Lotus, which would then modify its suspension and shoehorn a modified 3.6-litre straight-six engine that produced a monstrous 382hp. That was about the same as a Ferrari Testarossa.

The sheer performance and practicality of the Carlton made it a desirable choice for company execs across the UK. Unfortunately, it also made it a favourite for robberies — with one famous story involving the car licenced ‘40 RA’.

Calls to ban its sale never came to pass — and the Lotus Carlton lived on to become a legend.