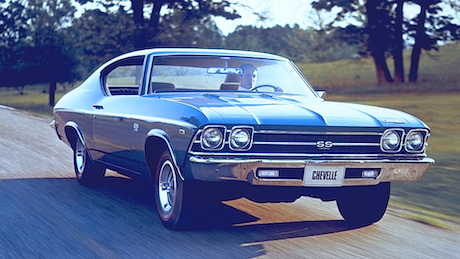 American muscle cars never really caught on here in the UK, but that’s not to say they aren’t any good. Here is our pick of the top 10 muscle cars:

There’s no denying that the Plymouth Superbird looks pretty special. That unique nose cone on the front and the gargantuan rear wing make it look like it means business, probably because it does.

When the iconic GTO name was first introduced, it was an option package for the Pontiac LeMans. It cost an extra $295 when the car was new and for this you got a 6.4-litre V8 with 325hp. It wasn’t until 1966 that the GTO became its own model.

In addition to the bigger engine, the GTO upgrade also brought firmer suspension and sharper steering. The timeless styling was well received when the GTO came out, and it still looks good today.

The Dodge Charger has cemented itself as a muscle car icon after being Dom Torreto’s go-to car in the Fast and Furious franchise, among other TV and film appearances.

The Charger was available with a variety of engines, but the car in the show had the iconic 7.0-litre Hemi V8. The styling was a hit as well, with the flip-up covers over the headlights and the wide grille giving it real road presence.

The Dodge Coronet was offered in a variety of body styles throughout its production run. Buyers could have an estate, a convertible or, arguably the best, the coupe. The styling is so ‘60s with the long bonnet and bold curves everywhere.

There was a huge range of engines as well, starting with an “economical” straight-six and working all the way up to the 7.0-litre Hemi V8.

The Chevrolet Chevelle SS (Super Sport) was Chevy’s first effort at a muscle car. When it was revealed in 1964, it lagged quite a way behind the Pontiac GTO, so Chevrolet set to work fixing that.

By 1970, they had given the Chevelle SS a 450hp 7.5-litre V8 engine, which could push it from 0-60mph in just five seconds. In fact, it was among the fastest accelerating road cars in the world when it was on sale.

The Mustang is arguably one of the most instantly recognisable muscle cars in the world, it’s one of the only ones that are available in the UK today. The 1968 Fastback is particularly special thanks to its starring role in the movie Bullitt.

The car used in that film was finished in Highland green and featured a 6.4-litre V8 with 320hp. It was such an iconic car that Ford released a modernised tribute for the current model.

Featuring in a film is a sure-fire way to give a car cult status, and this applies to the Pontiac Firebird Trans Am driven by Burt Reynolds in Smokey and the Bandit. It doesn’t really get much cooler than that.

The Trans Am was part of the Pontiac Firebird range with a 6.6-litre V8 engine putting out around 200hp. It was also available with a T-Top removable roof and distinctive gold graphics.

Time for the first modern muscle car on the list, and with a name like Demon you know it’s going to be a good one. It’s based on the Dodge Challenger Hellcat, which had 707hp, but Dodge decided that buyers wanted something more extreme.

They brought out the Demon as a car designed for the drag strip. It has 840hp and is a fair bit lighter than the standard Hellcat on which it’s based. Weight-saving measures even stretched to the lack of a passenger seat as standard.

The ZL1 is towards the more extreme end of the Camaro range, in fact, it can almost touch 200 mph given enough space. The Camaro has always gone head to head with the Ford Mustang but lags just behind the blue oval in terms of sales.

This won’t have been helped by the fact that the ZL1 was recently banned from sale in California and Washington due to the amount of copper used in the brake pads. However, this exclusivity may be what makes it so cool.

The Plymouth Barracuda was introduced just weeks before Ford unveiled the Mustang, however, it never reached the same level of sales. This has led to it becoming one of the most desirable classic muscle cars on the market.

The most sought after model however is the 7.0-litre Hemi engined car. It made 425hp, could do 0-60mph in 5.6 seconds and looked the part with its bold colours and ‘shaker’ hood (so the engine’s air intake pokes through the bonnet). Just 115 of these cars were built after it was cancelled due to tighter emissions regulations.

Buy your new car through carwow

If you’re after a new muscle car, check out the in-depth review of the Ford Mustang.

Or, if you’re looking for a new car and want to make sure you pay the best price, configure your ideal new car. Simply find the car you want, then sit back and relax while carwow’s trusted dealers come back to us with their best offers.

Head over to the configurator