10 of the best drift cars 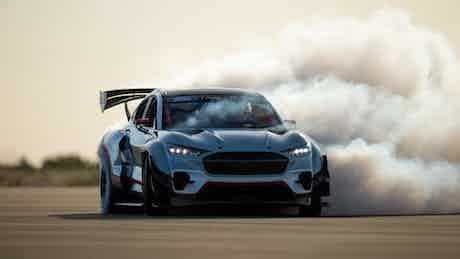 Drifting is one of the most fun things you can do with a car, so it’s no wonder car enthusiasts love to spend a weekend at a track burning rubber.

If you’re going to go drifting, you’ll need the right car for the job. You’ll need rear-wheel-drive, low weight and plenty of power to get sideways on a skid pan. This guide contains 10 cars which would make ideal candidates for drifting, just make sure you keep to a private track and not the public highway.

Our pick of the best cars for drifting are:

When Toyota launched the GT86 back in 2012, it marked the return of the back-to-basics, rear-wheel-drive sports car. It was an instant hit with petrolheads around the world, and its successor simply followed the same recipe.

The new GR86 gets a 231hp flat-four engine and a limited-slip differential as standard, making it easy to throw the tail out around corners. The low weight of 1,275kg and the slick six-speed manual gearbox make it feel that much more involved on the track.

If a bit of top-down drifting sounds like fun, you’ll want to look at the Mazda MX-5. It doesn’t matter which generation you go for, they all offer lightweight, rear-wheel-drive fun; and you can pick up a clean example of an early model for as little as £2,000.

If you want creature comforts for the drive home then you’ll want the latest Mazda MX-5. Go for a 2.0-litre model and you get more power, but more importantly a limited-slip differential as standard.

The BMW M3 Competition really is the car which does it all. During the week, you can use it as a comfortable family saloon for commuting and taking the kids to school. But at the weekend, the M3 is perfectly at home on a track.

The 3.0-litre twin-turbocharged straight-six kicks out 510hp and 650Nm of torque, plenty to get that tail sliding around. It doesn’t matter if you go for the grippy all-wheel-drive version either, because you can switch it into rear-drive only mode giving you the best of both worlds.

It may be quite expensive to run, with a yearly tax bill of over £600 and 20mpg if you’re careful, but very few cars offer such driving thrills for this money. There’s also a huge aftermarket scene for the 350Z, so modifying it to your tastes won’t be a problem.

If you think a sports car with a 1.8-litre four-cylinder engine isn’t very exciting, you might want to think again. The Alpine A110 only weighs 1,098kg, meaning it can slingshot to 60mph in just 4.5 seconds.

This low weight figure does wonders for the handling as well. It’s easy to slide this car arounds bends, and it’s comfortable enough for day-to-day use. The interior might not be as plush as you’d expect at this price point, however this car is more about driving pleasure than luxury.

If a 1.8-litre engine seems a bit puny, how about a 6.0-litre V8? With the Vauxhall Monaro VXR, that’s exactly what you get. It’s a fantastic engine to listen to as you exploit its 400hp and convert the rear tyres to smoke.

Monaro’s are getting thin on the ground these days, especially in more powerful VXR guise, but you can find them for around £16,000. It won’t cost the earth to run either. It may be thirsty, but the annual tax bill is £360, and it’s even ULEZ compliant.

The Ford Focus RS is a pretty extreme example of a hot hatchback, with 350hp and four-wheel-drive. It sticks to the road very well when you push hard, however there is a specific drift mode for when you want to have fun on a track.

The Focus RS can send up to 70% of its power to the rear wheels, making it much easier to get the car sideways. The firm ride can make it tricky to live with, and they’re pricey on the used market with prices starting at around £30,000, but very few hatchbacks drive this well.

Porsche knows how to make a car handle properly, and the Porsche 718 Cayman is a perfect example. The mid-engined, rear-wheel-drive layout and low weight make it great for hooning around a race track, and the flat-six engine makes a great noise, too.

It wouldn’t make an ideal daily driver, thanks to a firm ride and lack of storage space; but for a weekend blast it’s hard to beat. You can even go for a six-speed manual gearbox if you’d prefer to be more involved in the experience.

You might not expect to see an electric saloon car make this list, however the Tesla Model 3 Performance may surprise you. It has 490hp from its dual electric motors, and all that power can be sent to the rear wheels at the push of a button.

Combine this with a stability control program which can also be switched off and you have a can that’s actually pretty easy to get sideways. It’s a great car to live with as well thanks to a raft of tech to make driving easier and more comfortable.

Fast Audis are well known for their Quattro all-wheel-drive systems providing excellent grip in all weather conditions, and the RS3 hot hatch is no exception. Unlike other Audi RS models though, this one comes with a drift mode.

If you decide that your tyres have a bit too much tread left on them, you can send up to 50% of the engine’s torque to the rear wheels allowing you to have some fun. Once that’s out of your system, the RS3 turns back into a comfy, practical hatchback.

Use carwow to buy your next car

Whether you’re looking for a car to take drifting, or something to haul the kids around in, carwow is the free and easy way to change your car online.

You can sell your car to one of our trusted dealers for a great price. Simply upload some photos, answer a few questions and watch the offers roll in. If you accept an offer, the dealer can then collect the car from your home and transfer the money straight into your bank account.

Buying your next car through carwow is just as easy. Simply configure your ideal model and our dealers will come back to you with their best prices, saving you from needing to haggle. If you accept an offer, the car can be delivered to your home and a time to suit you.

Drag race: Nissan Skyline GT-R R32 vs R33 vs R34 vs Nismo GT-R R35
The best alternatives to the Mercedes A-Class
What is Alcantara suede? Is it worth it?
10 best cars with a high driving position
Drag race: Mitsubishi Evo VI Vs Subaru Impreza P1
New BMW 3 Series revealed: prices and specs confirmed
How is the Russian invasion of Ukraine affecting the global car industry?
Peugeot Allure trim: What is it and is it worth it?
Drag race: Audi RS5 vs BMW i4 M50
Understeer vs oversteer: What’s the difference?
Lamborghini Aventador generations drag race
Pedestrian crossings in the UK explained
Volkswagen Passat vs Audi A4
Skoda Laurin & Klement (L&K) trim: what is it and is it worth it?
How long do electric car batteries last?