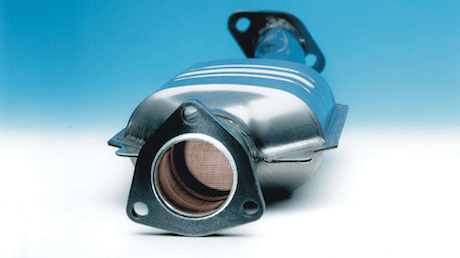 The vast majority of petrol cars on UK roads today are fitted with a catalytic converter. This is a device fitted to an exhaust system to filter out harmful particulate matter from an engine.

To do this, they’re packed with various metals — mostly very valuable ones. They command a high fee at scrapyards, which makes them a target for theft.

Data obtained by inews from 25 of the UK’s 45 police forces revealed over 20,000 instances of catalytic converter theft happened in 2020. Naturally, you might be worried it could happen to you.

If you’re looking for ways to prevent theft of your car’s catalytic converter, these tips should help.

1. Park off the road (if possible)

If you have access to a driveway or some other form of off-road parking, it’s good to utilise it.

In most cases, a car parked on a street will be much easier to access for potential thieves. If your car is more isolated, it may deter any would-be thieves from targetting you.

2. Leave your car closer to kerbs or fences

If you can’t park your car in secure off-street parking, it’s best to get close up to kerbs and fences as possible. Doing that will restrict access to the catalytic converter.

If possible, it’s even better to have the exhaust facing the side of the kerb. That will make it even tougher for thieves.

As with any type of theft, it’s easier to get away with under the cover of night. If you can, park your car in a well-lit area.

This should make it much more visible to passersby and surrounding properties, acting as a deterrent to potential thieves.

It’s possible to buy a clampable cage that will cover your car’s catalytic converter.

Toyota in particular offers some specifically designed clamps for some of its models, but plenty of aftermarket options are available too.

5. Avoid parking across the pavement and road

Parking your car with one side on a kerb and the other on the road will give potential thieves better access to the underneath of your car.

If you’re unable to avoid this, try parking your car with the exhaust lower to the ground and consider a clamp to cover the converter.

6. Have your catalytic converter marked

It’s possible to have a serial number marked on your catalytic converter, which is designed to help identify it if stolen.

As well as acting as a visual deterrent, it will also help scrapyards identify a stolen item.

7. Have a garage weld the bolts

If your car’s catalytic converter is held on with screwed bolts, it’s worth taking it to a garage to have them welded.

This will make it much more difficult to remove for thieves — requiring serious tools to cut the metal rather than simply unbolting it.

If you park your car directly outside your house, investing in some security cameras and lights are a good way to help prevent theft.

As well as giving you an extra eye over your car, simply having a camera on your home can act as a visual deterrent.

What to do if your catalytic converter is stolen

If your car’s catalytic converter is stolen, your first step should be to report it to the police. Call 111 and provide them with as much information as possible.

You should be given a crime reference number, which you’ll be able to pass on to your insurer. They’ll be your next port of call.

You should avoid driving your car without a catalytic converter. It might sound a lot cooler but it’ll also pump out emissions beyond legal levels. It’s best to get a replacement sorted as soon as possible.

Does my car have a catalytic converter?

Every petrol car sold in the UK since 1993 has been legally required to be fitted with a catalytic converter.

That said, the technology has been around since the ‘70s and was pretty much commonplace by the ‘90s anyway. So the chances are your car has a catalytic converter.

Why do people steal catalytic converters?

Catalytic converters use precious metals to reduce emissions by means of chemical reactions. The materials used within fetch a high price at a scrapyard as a result.

This is what makes them a key target for thieves looking to make a few quid quickly.

What cars are targeted for catalytic converter theft?

Though all cars are prone to catalytic converter theft, hybrid cars, in particular, are often targeted by thieves.

As they’re able to run on electric power, their catalytic converters tend to be much cleaner compared with equivalent-condition petrol cars. As a result, they can return a higher price.

Where is the catalytic converter located on a car?

Catalyst converters are underneath your car, located close to the engine.

A catalytic converter is usually a rectangular metal box, about the size of your arm. It’s bolted directly to the exhaust system.

Catalytic converter theft may be offered by some insurers. It’s worth checking your policy documents to be sure.