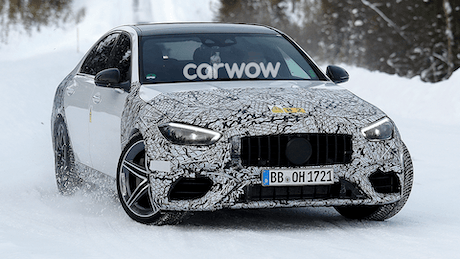 New Mercedes-AMG C63 hybrid prototypes have been spotted testing. This new high-performance model is set to be revealed this year with a new four-cylinder engine replacing the old car’s V8. Read on for everything you need to know…

A new high-performance AMG 63 versions of the latest Mercedes C-Class is on the horizon.

Prototypes of this new alternative to the BMW M3 have been spotted testing before the finished car makes its debut later in 2022.

You can expect the new AMG C63 to look similar to the recently revealed AMG C43 (shown above).

Of course, it’ll come with a few additional tweaks to make it look more aggressive and more exclusive.

The C63 will likely get wider wheel arches compared to the C43 to give it more road presence, as well as bigger side skirts and larger air intakes.

Some AMG-specific alloy wheels will also make an appearance on this prototype. Although don’t expect this test car’s mix-and-match approach to be offered on the finished production model.

At the back, a quad-exit exhaust system (likely to feature on the finished car) can be seen. The pipes appear to be square for the new C63, which will help you tell it apart from the less powerful C43 with its four round exhaust tips.

You can also see a new rear diffuser, as well as a subtle boot spoiler – things you can expect to see on the finished AMG C63 when the covers come off later this year.

Mercedes has already confirmed that the new AMG C63 will be making the switch to hybrid power – something hinted at by the electrical warning stickers on these prototypes.

It won’t be the first series-production AMG hybrid — that title goes to a AMG GT 4-door 63 S E. However, it will be the first to link a 2.0-litre turbocharged four-cylinder engine to an electric motor powerful enough to drive the car on its own.

The petrol engine could be lifted from the AMG C43, which produces a total of 408hp with the help of a small 14hp electric motor. Ditching this dinky unit for a more powerful 204hp motor could boost the C63’s total power output to more than 600hp.

That’s significantly more than the 510hp you get in the very latest BMW M3 and M4 Competition.

As a result, a new AMG C63 with this high-performance hybrid system could accelerate from 0-60mph in comfortably less than the BMW’s claimed sprint time of 3.5 seconds.

All-wheel-drive is almost guaranteed, along with a nine-speed automatic gearbox.

The new Mercedes-AMG C63’s interior remains a secret for now, though there should be a lot of similarities with the regular C-Class’ cabin. The swoopy dashboard design will be carried over mostly intact, as will the huge touchscreen display on the centre console.

Because the new C-Class is a little larger than the previous model, the new AMG C63 should be slightly more spacious than the car it’ll replace, too.

Not everything about the C63’s interior will be a carbon copy of the standard C-Class’, though. A smattering of sporty touches, such as shiny AMG-badged trim pieces and sportier seats will be fitted to this performance version.

The steering wheel will likely be redesigned, too, and will come with a few extra buttons controlling the car’s driving modes.

Expect the Mercedes-AMG C63 to be revealed later in 2022, and potentially go on sale before the new year.

Can’t wait for the new Mercedes-AMG C63? Check out deals on the Mercedes C-Class or compare the latest sports cars on carwow. You can also sell your current car through carwow. It’s quick, easy and you’ll get offers for what your car is really worth.