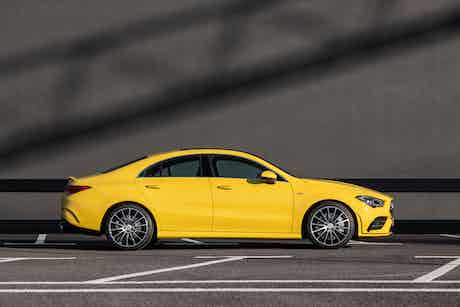 This is the Mercedes-AMG CLA 35 – the fastest version yet of Mercedes small four-door coupe. Read on to find out EVERYTHING you need to know about it.

The CLA 35 is a four-door coupe with a sporty grille and front bumper, power bulges on the bonnet, side skirts, a sporty rear bumper and twin exhaust pipes. While large 18-inch alloys come as standard, you can go one step bigger by specifying 19-inch alloys from the options list.

Compared to the recently revealed A 35 saloon, the CLA gets a longer bonnet and a sloping roof complete with pillarless doors. While around the back you get a flowing boot lid that looks longer than the stubbier rear end on the A-Class saloon.

The Mercedes CLA 35 gets the same cabin design as the normal CLA but with some added sporty touches. As a result, you get the same infotainment screens and the same pretty, turbine-style air vents. You also get metal and shiny black plastic trim pieces as standard while switchable mood lighting – with a choice of 64 selectable colours – is a cost option. Another option is the AMG steering wheel that you can already have on the Mercedes-AMG C63. Its flat-bottomed design means it looks sportier than the standard wheel and it also comes with touch controls for the voice activation system and cruise control. Pay extra, and you can even have a small screen on the steering wheel which displays your drive select setting and has a scroll wheel for quickly switching between different modes.

The whole look is finished off by the CLA 35’s mixture of Artico (that’s fake) leather and Dinamica upholstery, with red contrast seat stitching, red piping, red seat belts and red trims around the vents, although you can go for black and grey if that all sounds a bit much.

The CLA 35’s interior is dominated by two huge infotainment screens that flow from behind the steering wheel to the centre of the dash. They’re equipped with Mercedes MBUX operating system which understands voice commands like Apple’s Siri so you long as you start your instructions with the words ‘Hey Mercedes…’ it can do everything from setting a destination in the sat nav to turning on your seat heater. Plus, you get Mercedes’ Interior Assistant. It can detect who’s operating the touchscreen and control things like the lights, ventilation system, and seats depending on who’s controlling them. So, if the front passenger puts their hands towards the screen, it’ll automatically present the controls that apply to their side of the interior.

You also get features that are unique to the CLA 35 such as the infotainment’s Supersport setting. That gives you a huge rev counter display and, next to it, information on the car’s Warm-up, Set-up, G Force and Engine Data.

The optional AMG Track Pace pack goes one step further giving you, according to Mercedes, a ‘virtual race engineer’. It permanently records 80 parameters including speed, acceleration and G forces and, if you ever take your Mercedes on track, can record lap and sector times – with elements turning red or green depending on whether you’re up or down on your last time. Using the car’s augmented reality sat-nav, it can even overlay the correct racing line on to the centre screen on famous tracks such as Silverstone. Finally, it can record acceleration and braking times – to give you confirmed bragging rights down the pub.

The CLA 35 uses a souped-up variation of the petrol engine fitted to the CLA 250. As a result, power from the turbocharged four-cylinder increases from 224 to 306hp and you get 400nm of torque. Enough to get the car from 0-62mph in just 4.9 seconds and on to a limited to 155mph top speed. That acceleration comes thanks to the car’s standard four-wheel-drive system, which can send up to 50% of power to the back wheels, electronically, when it’s needed. The other factor that makes the Mercedes so quick is its seven-speed DCT dual-clutch gearbox that gives you perfect changes every time and has a race-start function for slingshot acceleration off the line.

Along with the added straight-line performance, a number of changes have been made under the skin to make the A CLA 35 even better to drive than the standard car. In fact, even the car’s structure has been reinforced with additional struts and a solid metal plate under the bonnet to stiffen the car up and make it feel more precise in corners.

To that you can add upgraded drilled and ventilated disc brakes with powerful four-pot front calipers and variable-ratio power steering which gets sharper depending on what drive mode you’re in. Plus an adjustable exhaust that gets louder in Sport and Sport+.

Raid the option’s list and you can get yourself adaptive dampers, so you can choose between a soft suspension setup to make long drives as comfortable as possible or making it stiffer for better handling in bends.

It’s not just the hardware that’s been revised, you also get upgraded software. You can choose from four drive modes including Comfort, Sport, Sport+ and Individual settings. In Slippery the car optimises for snow and ice by reducing the power, flattening the torque curve and softening the geabox’s shifts to make the Mercedes drive as smoothly as possible.

You can also use the drive select to adjust the car’s AMG Dynamics torque vectoring system, which has two modes – Basic and Advanced. In Basic – selected in Slippery and Comfort settings – the system focuses on providing stable handling, while in Advanced – in Sport and Sport+ modes – it makes the car sportier to drive on country roads.

And if that all sounds like your cup of tea – and why on earth wouldn’t it – the Mercedes-AMG CLA 35 goes on sale at the end of April with a starting price of £38,000 and first deliveries expected in August.