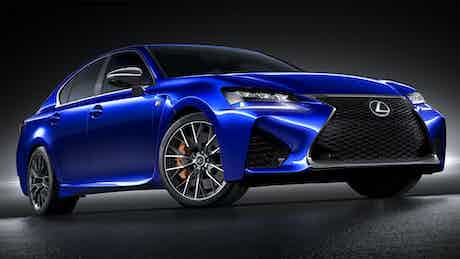 Good news for people who like super saloons and Lexuses – there’s a 467hp version of the Lexus GS on its way.

This handsome beast is the forthcoming Lexus GS F. It’s Lexus’s “F” performance version of the “GS” saloon car. And it’s packing an impressive, if not class-leading, amount of power.

Aside from “F” badges, the standout new feature is the engine. Until now, the GS had only been available as petrol-electric hybrid versions in the shape of the GS300h and the GS450h, but the GS F is powered by petrol alone. It has a 5.0-litre V8 engine, producing 467hp at a relatively lofty 7,100rpm, with a peak torque rating of 388lb ft arriving at 4,800rpm. Unusually for a present-day performance engine, it’s naturally aspirated – meaning there are no turbochargers or superchargers to help it along – which should mean a snappy throttle response to go with what looks to be a rev-happy nature. Even more oddly, the engine can operate either in the standard four-phase “Otto” cycle that most petrol units use (the normal suck, squeeze, bang, blow) or the “Atkinson” cycle sometimes seen in the petrol engines used in hybrid applications to improve efficiency at the expense of power. Though no data is yet available for fuel economy and emissions, we suspect the car will perform better than its power figures suggest as a result.

We don’t know. The car is to be revealed in the metal at the 2015 North American International Auto Show in Detroit, so it’s a bit early to have prices fixed down yet. We’d wager it’ll be somewhere around the £70k mark though, given the company the GS F will be keeping. Speaking of which…

Just about everyone who makes an executive saloon of this size also offers a performance variant, so there’s going to be some serious combat for sales. The first name on everyone’s list will probably be the 560hp BMW M5, while the 557hp Mercedes-Benz E63 AMG is available as either a saloon or an estate. Another one for those who can’t decide between car and wagon body styles is the Jaguar XFR-S, each packing 542hp. You’ll notice that the Lexus doesn’t have as much power as its rivals, but let’s hope it’ll make up for it in other areas once it’s been road tested.

Lexus is claiming a kerb weight of 1,830kg, which makes it one of the lightest cars in the class – undercutting some of its porkier super saloon rivals by a fifth of a ton. This means that while it seems to be outclassed in the pure power stakes, it makes up the shortfall in power-to-weight ratio and should be nimbler, more fuel efficient and kinder on its tyres too. It ought to be among the cheapest cars of its kind to run.

An intriguing and striking alternative in the sports saloon sector.