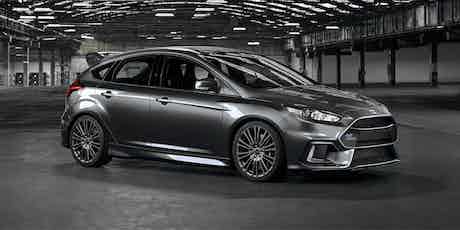 Ford has been spotted testing what could be an even faster version of the Focus RS, called the RS500. Read on for full details and pictures…

A high-performance Ford Focus RS500 prototype has been spotted undergoing testing. Images from AutoEvolution give us a glimpse of what this new special edition Focus RS model could look like. Read on for full details…

If you can’t wait for this new version to go on sale, or if the standard car is already fast enough for you, use our Ford Focus RS configurator to check out the best deals on offer. If you’re not sure what to buy, read our list of the fastest hot hatches currently on sale or take a look at our deals pages and car chooser tool.

Images of Ford’s test car show its exterior differs only slightly from the standard Focus RS hot hatch. A new black bonnet with cooling louvres suggests the 2.3-litre turbocharged engine could be producing more power and, therefore, more heat than the RS but, besides a few missing trim pieces, little else has been altered.

The previous generation RS500 shared the same bumpers, side skirts and spoiler as the standard RS – the only visual difference was a matt black paint job and red ‘500’ badging. It’s possible this new car will follow a similar pattern and look only slightly different to the standard RS when it goes on sale.

The RS500 is expected to be significantly lighter than the standard RS – this means it could come with a back-to-basics interior more akin to a racing car than your everyday hot hatch. The extensive use of aluminium and carbon fibre reinforced plastics in place of steel could reduce the car’s mass by more than 100kg, significantly improving both handling and acceleration.

If Ford decides to take extreme measures to reduce weight, such as removing sound deadening from the engine bay and cabin, the RS500 could prove to be significantly louder and less refined than the regular RS.

The RS500 should receive a number of engine upgrades to help it compete with the likes of the 381hp Mercedes A45 AMG and 362hp Audi RS3. The standard car’s 345hp 2.3-litre turbocharged four-cylinder unit could benefit from turbo and intercooler upgrades, allowing it to leap from 0-62mph in as little as four seconds.

The standard car’s four-wheel-drive system is expected to be combined with a new automatic gearbox to help reduce the time taken to change gear. This may seem like a step in the wrong direction in terms of driver involvement but, if Ford is aiming to make the RS500 the quickest accelerating hot hatch on sale, an auto is a sensible choice.

The standard Focus RS was initially tested with an electronic limited-slip differential on the front axle. Although this system wasn’t fitted to production models, the handling benefits it provides could mean it makes an appearence on the faster RS500.

No official details have been announced but we expect it to cost more than £40,000 when it goes on sale. We will probably see more prototype cars undergoing testing in the near future but the RS500 probably won’t go on sale until 2017.

Save money on your new Ford Focus RS

If you can’t wait until 2017 to get behind the wheel of a new hot hatch, use our Ford Focus RS configurator to see the best deals currently on offer. If you’re not sure what car to buy, read our list of the fastest hot hatches currently on sale, or take a look at our deals page and car chooser tool.