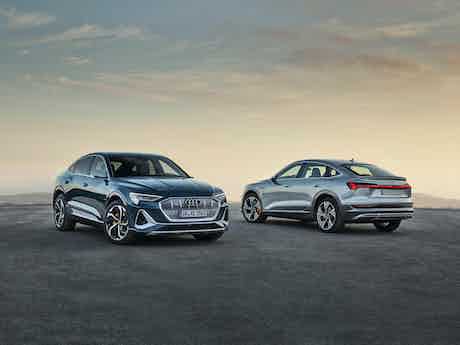 The Audi e-tron Sportback 55 quattro is a practical electric SUV with a swept, coupe-style roofline. Here’s everything you need to know about it.

Park the Sportback next to a standard e-tron and you’ll see there’s more to the new model’s styling than just its coupe-style roof. Upfront, the aggressive lower bumper makes the car looks more dynamic thanks to the large functional vents that send air around the front of the car.

There’s no denying that its around the sides you’ll spot the biggest changes. The e-tron’s upright roof has been swapped for a more tapered design that, when combined with box-style creases around the car’s wheel arches, make the Sportback look a lot sportier. You can choose from wheels up to 21-inches in size and the rear-view cameras – which replace conventional wing mirrors and were first seen on the e-tron SUV – are also on the options list.

Another e-tron SUV carryover is the distinctive light bar at the back of the car, but the sporty ducktail spoiler is unique to the Sportback and at its boldest in S line models. Audi has also resisted the urge to give its emissions-free EV fake exhaust pipes.

You can have your e-tron Sportback in one of thirteen paint colours including this Plasma Blue metallic, while the wheel arches and sills are finished in matt anthracite to make the car make it look more like an upright off-roader.

The e-tron’s coupe-style roof looks more stylish, but it also makes the car more efficient at cutting through the air – reducing the e-tron’s drag coefficient from 0.28 to 0.25. That, according to Audi, means you’ll be able to squeeze and extra six miles out of the car’s battery compared to the regular SUV.

The e-tron Sportback’s Digital matrix LED headlights represent a world first. They can project animations on the road that can do everything from mark the centre of your lane on the motorway to presenting dynamic lights shows that are performed when you lock and unlock the car. These features come in addition to what you’d expect of traditional Matrix LEDs so you can use your full beams without dazzling other road users, they’ll follow the curves of a country road and can even illuminate a lane on the motorway in anticipation of you moving into it.

Inside, the e-tron Sportback feels like any other top-end Audi, which means you get a smart design constructed from soft-touch plastics and finished with a variety of expensive trim pieces and metals.

Naturally, you get a large infotainment screen behind your steering wheel, plus a pair of stacked touchscreens on the centre console – the lower of which has haptic feedback, vibrating to make it feel like you’re pressing actual buttons. The Audi’s infotainment is voice-activated and also includes Amazon Alexa which can reliably understand more than 80,000 voice commands.

You can connect to the infotainment system using the myAudi app allowing you to do things like preheat the car, check the battery range and schedule charging. The e-tron Sportback also allows for online equipment updates so you’ll be able to retro enable functions such as the car’s Matrix headlights via payment and an online update.

The cost of that sloping roof is most felt from the Sportbacks rear seat where there’s 20mm less headroom than in a standard e-tron, although tall adults should still fit. You can also expect there to be plenty of leg and footroom and the front of the car is as spacious as the standard e-tron – which has loads of room. The Sportback has a 555-litre boot capacity to the standard e-tron’s 605 litres, and that increases to 1,655 litres with the back seats folded away. You also get an additional 60 litres in the front boot where you’d usually find an engine.

The e-tron 55 Sportback is powered by two electric motors – one on the front axle and another on the back – which produce a combined 360hp. That’s enough to get the car from 0-62mph in 6.6 seconds and give it a top speed of 124mph. Shift the car’s drive select from D to S, sink the accelerator into the floor and power will be momentarily (for eight seconds) be boosted to 408hp – getting the car from 0-60mph in 5.7 seconds. Though driving like that will eat into the car’s potential 277-mile range significantly.

When the e-tron Sportback goes on sale next year there will also be 50 model with 308hp and smaller battery giving a range of up to 215 miles and 0-60mph in 6.8 seconds.

Having an electric motor on both axles make the e-tron Sportback four-wheel drive and it can send power to whichever car has the most grip quicker than a mechanical system. Most of the time, though, the car relies on its rear motor to save electricity, with power being sent to the front the minute slip is detected when powering out of a corner say.

Combined with the air suspension – which can be set up to be firm or cosseting – and the car’s perfect 50:50 weight distribution, it means the Sportback, which weighs about 2.5 tons, is easy to handle on twisty roads.

The Audi e-tron can be recharged to 80% within half an hour using a public 150kW fast charger – that goes for both the 50 (215-mile-range) model and the 55, which can get 277 miles on a charge. Using a 7kW charger – the type you can fist to most homes – the e-tron will take significantly longer to charge to full – or about 12 hours.

The Audi e-tron Sportback will be available with a full suite of autonomous kit meaning it’ll be able to accelerate, brake and steer itself on the motorway and in heavy traffic. The safety kit can be bought when you order the car or specified afterwards and downloaded.