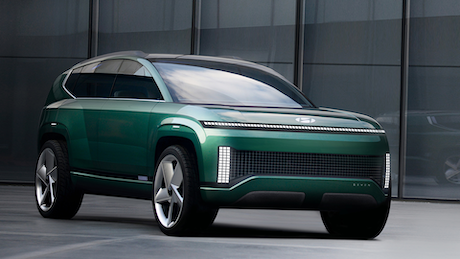 The new Hyundai 7 Concept has been revealed at the L.A. Auto Show. This bold electric concept car shows you what the electric Hyundai Ioniq 7 will look like when it goes on sale soon. Read on for all you need to know.

Hyundai has revealed a new 7-seat SUV called the SEVEN at AutoMoility LA. This electric SUV will be an alternative to the BMW iX and Tesla Model X when it goes on sale in 2024 as the Hyundai Ioniq 7.

This all-new SUV is expected to borrow parts from today’s Hyundai Ioniq 5 and the upcoming Ioniq 6, but it has a radically different design. Read on for all you need to know.

The new Hyundai Ioniq 7 won’t look anything like the current Hyundai Ioniq 5 electric car. These images of the SEVEN concept reveal that it’ll have a bold front end with a blunt nose and numerous pixel-style lights.

These look a little like they belong on an eighties-era stereo equaliser, but you can bet they’ll come programmed with plenty of Audi-esque animations that play when you lock and unlock the car.

Around the back, the pixel theme continues with a huge light bar built into the completely flat tailgate. In fact, most of the surfaces on the large SEVEN SUV are flat, with just a few creases and contours added to give a muscular appearance.

Like the new Kia EV9 concept, the SEVEN has rear-hinged back doors which open up to give great access into a rather special interior.

If it looks anything like this SEVEN concept car, the new Hyundai Ioniq 7 is set to have an interior like nothing you’ve ever seen.

The concept’s minimalist design with lounge-style seating and unpolished wood really sets it apart from other SUVs on the market today.

The Hyundai SEVEN concept is optimised for autonomous driving, with a control stick that can hide away when you’re in self-driving mode. The interior seating is set up more like a lounge than a car, with armchairs in the front which swivel and what looks like a corner sofa in the back.

The lounge theme continues with what Hyundai calls the island centre console that houses appliances and a built-in fridge for your refreshments.

There is also a curious compartment for the passenger’s shoes which freshens them as you drive.

Before you get too excited about this living room on wheels, it’s worth noting that this is only a concept car, and so it’s unlikely that a lot of these features will make it into production.

You can expect to see more design cues from the current Hyundai Ioniq 5 (shown below) and upcoming Ioniq 6 electric cars.

Hyundai may continue the moving centre console idea from the Ioniq 5 in the new Ioniq 7 SUV, but make it more versatile for added practicality.

The SEVEN concept features recycled and sustainable materials to reduce pollution during the production process.

Hyundai has confirmed that the new Ioniq 7 will use the same underpinnings as the Ioniq 5 and the upcoming Ioniq 6. This means you’ll likely be able to get it with a single electric motor or as a more powerful dual-motor model.

The larger Ioniq 7 may not be offered with the Ioniq 5’s entry-level 170hp single-motor setup, but you may be able to get it with that car’s more powerful 217hp motor and 306hp dual-motor system.

The new Hyundai Ioniq 7 will almost certainly share the Ioniq 5’s batteries as well as some of its motors. Hyundai has confirmed that the SEVEN concept has a range of 300 miles

Just like the Ioniq 5, a 100kW public charger should boost the batteries from almost flat to 80% full in around 35 minutes, while a beefier 350kW charger (if you can find one) will take less than 20 minutes.

It’s likely the finished Hyundai Ioniq 7 won’t go on sale until around 2024. When it does appear in showrooms, it’ll likely cost in excess of £50,000. That’s significantly more than a top-spec £45,000 Hyundai Santa Fe.