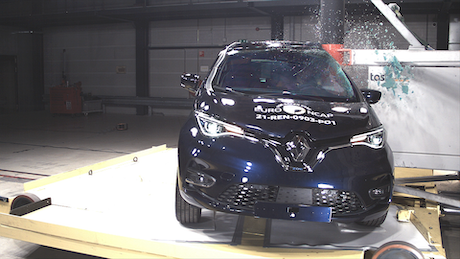 The Renault Zoe has scored zero out of five stars in the latest round of Euro NCAP safety tests, with the new Dacia Spring not faring much better with just one star. Read on for all you need to know.

Configure your next car with carwow

Why did the Renault Zoe score so low with Euro NCAP?

The Renault Zoe has become one of just three cars to ever score zero stars in the Euro NCAP safety tests, mainly because of what testers called a “conscious decision” to remove the head portion of the head and thorax airbag from the car.

This resulted in a poor performance in the side-pole test, which replicates a side impact with a solid object such as a tree or lamp post; this type of collision results in a fatal or serious accident in a third of cases. The head of the dummy in the Zoe’s driver’s seat impacted with the pole during the test, which experts said could result in life-threatening injuries in a real-world scenario.

The Renault Zoe scored the full five stars when first assessed by Euro NCAP in 2013, but changes to the car’s specification and increasingly stringent crash tests have resulted in the latest model scoring no stars.

Matthew Avery, chief research strategy officer for Thatcham Research, which crash-tests cars in conjunction with Euro NCAP, said: “It is a serious concern to see results like this in 2021, especially from a manufacturer who has previously performed well in Euro NCAP testing.

Avery highlighted that Renault was the first manufacturer to offer a head and thorax airbag, which featured in the second-generation Laguna that was tested in 2001.

Avery added: “The adult occupant score of 43% for the Renault Zoe is the lowest we have seen in 11 years. Overall, carmakers today consistently achieve good ratings in impact testing, despite Euro NCAP raising the bar to ensure the programme remains the most safety-focused in the world.”

The Renault Zoe was also marked down for a lack of standard fitted active safety features such as autonomous emergency braking and lane departure warning. While these features are available on the Zoe, they are optional extras.

An official statement from Renault says: “Renault reaffirms that Zoe E-Tech Electric is a safe vehicle, which complies with all regulatory safety standards. These standards are constantly evolving and are becoming more stringent in all domains, especially in safety. Renault therefore continually improves its offer in order to comply with the regulations applicable where its vehicles are sold.

“Zoe was launched in 2013 and received 5 stars with EuroNCAP protocol at that time. The EuroNCAP protocol has since 2013 undergone five changes. With the same equipment, a model can lose up to two stars in each protocol change.

“From 01/03/2022, Advanced Emergency Braking will be fitted on every Zoe E-Tech Electric trim level as standard.

“The evolution of the current Zoe was decided in 2017 adapting the passive safety equipment to real accidentology and updating the car with state of the art ADAS equipment such as Advanced Emergency Braking with Pedestrian and Cyclist Detection, Lane Departure Alert and Lane Keeping Assist, using a radar and a camera.”

The new Dacia Spring EV hasn’t fared much better in the Euro NCAP tests, scoring just one star out of five.

While the Spring is fitted with head and thorax airbag that saw the Zoe score zero stars, it performed poorly in the front impact test. The results showed severe chest compression and very little protection for the driver’s pelvis and legs.

The results for child occupant protection were also poor for the Spring. Matthew Avery commented: “The 6-year-old dummy had weak protection, suggesting the forces of a crash could end in serious neck and head injuries. This is anything but a safe family car, despite being marketed as a good option for families.”

Dacia has released an official statement in light of these results. They said: “Spring is a safe new A-segment car. It is homologated, complies with European safety regulations and goes even beyond.

“Spring proposes a full list of safety features providing better protection than most of the cars on the roads of Europe today (including those of upper segments).

“However, the contradiction remains between the light weight / small size of the car (which makes them more efficient and more accessible) and the resistance in terms of crash. Especially with EuroNCAP protocols getting more and more stringent every 2 years, in particular for small city cars.

“Dacia is not chasing Euro NCAP stars that would imply fitting vehicles with features and technologies, like some ADAS, that our customers don’t want to use.”

Full marks for other cars tested

Check out the safest cars on sale

The electric Mercedes EQS was another five-star car, and “one of the best performing vehicles this year” according to Thatcham, thanks to its 96% score for adult occupant protection. The Fiat 500e and the MG Marvel R – an electric Skoda Enyaq rival that has not yet been confirmed for UK sale – scored four stars.

What is Euro NCAP?

Euro NCAP conducts safety research and testing on every new car sold in Europe. They perform multiple crash tests on each car, before analysing the results and scoring the car across four categories.

These categories are adult occupant, child occupant, pedestrian and safety assist. The car will be scored in each category before an overall score out of five is given.

Click the button below to read our complete guide to Euro NCAP scores.