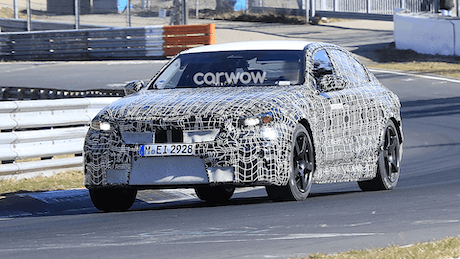 The new BMW M5 has been caught testing, and it looks like it’ll be coming back as a plug-in hybrid. Read on for full details.

It looks as though a seventh-generation BMW M5 is getting near, with prototypes having been recently spotted out and about undergoing testing.

The latest iteration of this iconic super saloon is expected to switch to plug-in hybrid power. This extra electric kick should prove handy to help the new BMW M5 compete with the next generation of hybrid performance cars from Mercedes-AMG, such as the 843hp AMG GT 4-door.

Let’s get the bit you’re all looking for out of the way — the grille. It seems as though BMW may be resisting its current trend of ultra-tall ‘kidneys’ upfront. Instead, the new BMW M5’s grilles look like they’ve grown outwards rather than upwards.

Plus there looks to be an additional air intake across the bottom of the bumper. The three-piece design here is just a result of the prototype car’s camouflage and will be tidied up a bit before you see the finished production M5.

In contrast, the headlights on this BMW M5 prototype look to be quite small. Although, once more, this could be another area that changes for the final car.

The typical three-box saloon silhouette remains as well for the BMW M5 – it hasn’t turned into some swoopy pseudo-coupe like the AMG GT 4-door.

Don’t read too much into the design of the alloy wheels or brake lights, these look like they’ve only been fitted for testing purposes. Crucially, you can spot the usual M car quad-exit exhaust setup underneath.

Oh and look carefully, and you’ll spot a few stickers with ‘Hybrid Test Vehicle’. Why? Well…

The new BMW M5 is going plug-in hybrid. Don’t grab the torch or pitchforks yet, though — it isn’t becoming an eco-focused saloon.

Rather, it’s expected to use a V8 engine linked up to an electric motor, producing about 750hp and 1,000Nm of torque. If that sounds familiar, that’s because it could be the same one found in the BMW XM SUV.

A short electric-only range will be possible as well, but the electric assistance is primarily there for performance.

Expect the all-wheel-drive system and eight-speed automatic gearbox from the existing BMW M5 to carry over, though.

No images have surfaced yet of the new BMW M5’s interior, but expect plenty of tech borrowed from the new BMW i4 and updated 3 Series.

This is likely to include a huge curved infotainment display running the latest BMW iDrive system.

It’s clear the BMW M5 is still in its early stages of development, so expect to see it on the roads sometime in 2024.

Keen on a BMW M5? Take a look at deals on the current car or compare this super saloon to the Mercedes-AMG E63 or Audi RS6