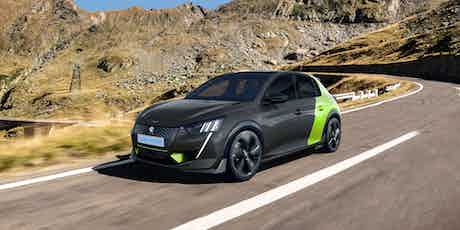 Peugeot is working on an all-electric version of its 208 GTi hot hatchback. This is an exclusive preview of what it could look like.

Only months after introducing its first small all-electric hatchback – the e-208 – Peugeot has hinted that it is going to be unveiling a souped-up, sporty version in 2020.

Above is carwow’s exclusive render of the all-new model, that is expected to be officially unveiled at next year’s Geneva motor show. It’s been suggested the new car could be named the Peugeot 208 GTe, to flaunt its status as an all-electric 208 GTi hot-hatch companion.

The GTe design you see here has a number of obvious cues that hint at its hot-hatchback nature. For a start, the two-tone, black-and-green colour scheme is inspired by the paint-job you’d find on other performance Peugeots, including the larger 308 GTi. The lime green was directly influenced by the Peugeot 508 Sport Engineered concept car, which was a hybrid.

The grille has been filled in in the same manner as the e-208, directly hinting at the GTe’s all-electric nature. There are air intakes at the bottom corners of the front bumper, as well, both large and angular.

Around the side, the wheels have been made bigger and coloured black, making it look sportier and more purposeful. Plus, the side skirts have been overhauled with subtle vertical fins, again inspired by the 508 Sport Engineered.

Finally, around the back, you can’t miss that small spoiler placed just above the rear window.

The GTe is still clearly a 208, though. It has a lot in common with the standard car, most notably those headlights and the fang-like daytime running lights slashed beneath them.

What do you think of carwow’s newest render? And are you excited to see the Peugeot 208 GTe in the metal next year? Tell us in the comments below!

Bookmark the carwow news page to stay up to date on all the latest models.