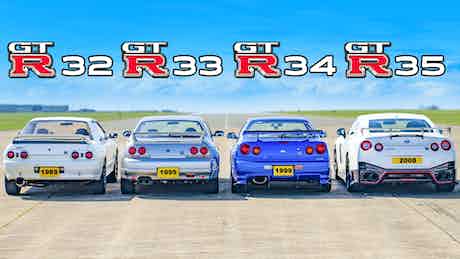 Watch out, people of Tokyo — a line-up of Godzillas has assembled for today’s carwow drag race.

Yep, every modern generation of Nissan GT-R is represented as the Skyline R32, R33 and R34 GT-Rs face off against the full-blown Nismo R35.

Powering each of the Nissan Skylines is the legendary RB26 engine. This is a 2.6-litre, twin-turbocharged straight-six engine bred on the racetrack.

Thanks to a ‘gentleman’s agreement’ in Japan from the ‘80s to early ‘00s, manufacturers in the Asian country could not officially produce cars with more than 280hp. So on paper, that’s what the R32, R33 and R34 kick out.

As you may expect though, the latest Nismo GT-R R35 blitzes those before it. Its 3.8-litre ‘VR38’ engine kicks out 600hp and 652Nm. Like the other GT-Rs, it sends that power to all four wheels, albeit through a six-speed dual-clutch gearbox rather than an old-school manual.

Want to see which of these monsters comes out on top? Well, you’ll have to watch to find out…

Looking to buy your next new car? Let carwow WOW you with the latest offers