What does TSI stand for on a car? 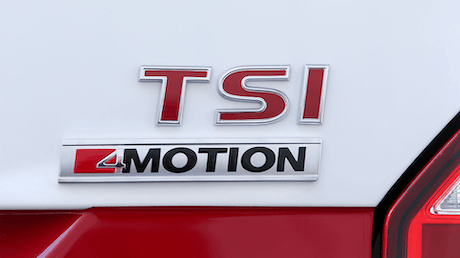 You’ve likely seen TSI on the back a few cars before, but what does TSI stand for?

This guide is here to explain all, and to help you decide if TSI power is in your future.

What is a TSI engine?

A TSI engine is a type of petrol engine produced by Volkswagen.

It stands for Turbocharged Stratified Injection, and in basic terms refers to the engine being turbocharged.

It’s an evolution of Volkswagen’s TFSI (Turbocharged Fuel Stratified Injection). Though similar, the improvements made to new TSI engines generally have increased reliability and low-end torque.

Which cars have a TSI engine?

You’ll find TSI engines across a multitude of Volkswagen Group cars. These include ones sold under the Volkswagen brand, as well as SEAT and Skoda.

Cars like the Volkswagen Golf, Skoda Fabia and SEAT Leon use TSI engines at the core of their lineups.

What types of TSI engines are available?

1.0-litre engines are reserved for smaller cars, including the Volkswagen Polo and Seat Ibiza.

The 1.5-litre engine can be found across a variety of cars, right from the Skoda Octavia up to the Kodiaq and everything in between.

2.0-litre engines are typically reserved for SUVs like the SEAT Tarraco, as well as hot hatches like the Volkswagen Golf R.

The largest of all TSI engines on offer is a 3.0-litre V6. This is used exclusively in the Volkswagen Touareg.

What’s the difference between a TSI and TDI engine?

A TSI engine is petrol, whereas a TDI engine is a diesel. TDI stands for Turbocharged Direct Injection, again signifying it’s a turbodiesel unit.

TDI engines will typically have better fuel economy compared to a TSI (especially if you do lots of long motorway journeys), as is usually the case with any diesel engine compared to petrol. TDIs tend to be more expensive to purchase though, and the fuel itself typically costs more per litre.

Whichever suits you best depends on your driving habits. If you cover lots of miles a year, especially on the motorway, a TDI will more likely be suited.

In contrast, if you spend a lot of time in urban areas or don’t drive all too much, a TSI may be the way to go.

Can I change the colour of my car?
What does TDI stand for?
10 best cars for students 2022
How often should you service your car?
Number plate retention guide
6 best new car warranties in 2022
What is MPG in cars?
Top safest cars in the UK (2022)
What is ESP on a car?
The 10 best used family cars
Euro NCAP ratings explained: how safe is your car?
10 best cars with three full rear seats
Selling a deceased person’s car
The best cars with big boots
Lost your car keys and don’t have a spare? Here’s what to do