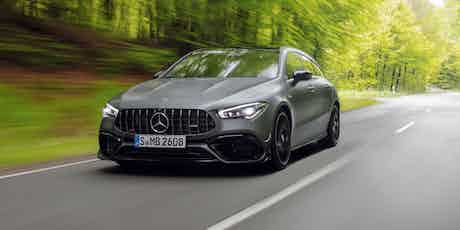 The new CLA 45 Shooting Brake sporty estate is set to join the burgeoning Mercedes-AMG line-up. Here’s everything you need to know.

Mercedes is making two variants of the CLA 45 Shooting Brake – one hotter than the other. In the UK, you’ll only be able to buy the top-of-the-range S version when the car goes on sale in August. It will cost around £55,000.

A new, swoopy rear end and estate-style proportions have created a more practical version of the regular CLA 45 four-door coupe. Otherwise, the Shooting Brake is pretty much the same as the regular CLA. This means you get slender LED headlights, a chrome-toothed slatted grille and a smattering of racing car-inspired winglets and air vents.

On the S model, 19-inch alloy wheels contain conceal uprated brakes with red calipers. At the rear, there is a purposeful-looking rear diffuser, plus four chunky 90mm exhaust pipes – all of which are real.

Mercedes claims that the new CLA 45 Shooting Brake offers both a sportier and more comfortable experience compared with the previous car. It gets firmer suspension and, as an option, AMG Ride Control. This is a system of adaptive dampers that give you three different modes, letting you manually adjust the drive from comfortable, road-focused settings to a more hardcore, track-oriented setup for maximum body control.

The 2.0-litre turbocharged petrol engine, with 421hp and 500Nm of torque, is the most powerful four-cylinder production engine ever. It transmits its power to the road via a twin-clutch eight-speed gearbox and four-wheel drive. It also features a Race Start function, which allows you to indulge in maximum-attack acceleration from a standstill.

The Shooting Brake can go from 0-62mph in exactly four seconds. That’s the same as the coupe CLA 45 but a tenth of a second slower than the A45 hatchback, both of which have the same engine. At top speed, the Shooting Brake will hit 168mph.

The Shooting Brake is four-wheel drive and uses the Mercedes 4Motion system, which can quickly send power to the front or rear wheels when they need it most. Unlike other all-wheel-drive systems – such as the one you would find in the Volkswagen Golf R, for example – the 4Motion can also split power between the two back wheels, letting you drift as gracefully as a skater on an ice rink. Well, that’s the idea, at least.

The Shooting Brake has six driving modes as a part of its AMG Dynamic Select system. These can adjust everything from the sensitivity of the accelerator pedal to the gear-shift speeds to the exhaust sound. Basically, the car’s adaptable, and should be capable of feeling just as at home belting out high-octane performance on a track as it does calmly cruising along the motorway.

The CLA 45 Shooting Brake makes use of the Mercedes MBUX infotainment system. This set-up – first seen in the Mercedes A-Class – twins the digital driver’s display and the central, dashboard-mounted infotainment into a pair of conjoined screens. The MBUX’s party piece is its Augmented Reality sat-nav, which is able to project directions over a live feed of the road ahead, filmed by a camera at the front of the Shooting Brake.

The cabin itself has front sports seats, partially covered in Artico leather (which is actually artificial) and prominently featuring red highlights that continue onto the dashboard, centre console, pedals and air vents. In the S version, yellow highlights will be found instead. Meanwhile, that estate car shape means a larger 505-litre boot than you’ll get in the four-door coupe CLA. The storage space is also of a squarer shape, making it easier for you to load heavy luggage into.

Bookmark this page to stay up to date on the Mercedes-AMG CLA 45 Shooting Brake.