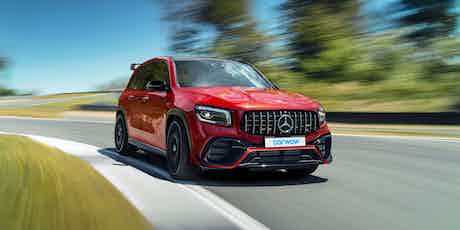 A new, performance-orientated variant of the Mercedes GLB SUV is expected to arrive next year. Here’s carwow’s render of what it could look like, as well as everything we know about the car so far.

This is the upcoming Mercedes-AMG GLB 45 SUV. It’s expected to top the Mercedes GLB range, as a performance-driven model with a sporty-looking exterior and significantly increased power output. It isn’t due to arrive until next year yet, above, you will find carwow’s exclusive render of how we think the car will look, based on what we know so far.

With regard to the styling, the AMG GLB 45 is based on the standard GLB, due to go on sale later this year. However, there are a number of new, sporty fixtures, including a large, jet black spoiler, like the one fitted to the upcoming Mercedes-AMG A45 hatchback. As on other AMG models, the grille has been adorned with twelve vertical slats running down it. The roof rails found on the standard GLB have been scrapped, as has the black trim around the wheel arches and the bottom of the doors.

At the front you will find much larger and more savage-looking air intakes, replacing the fake vents that you’ll find on the regular GLB. The chrome at the bottom has vanished, replaced by a sleeker, black inlet that can siphon as much air as possible to the significantly more powerful engine.

The GLB 45 is expected to go on sale next year.

The AMG A45 hatchback will only be available in its range-topping ‘S’ guise when it comes to the UK. As such, you can expect the same from the GLB 45. This means that the SUV will have a 2.0-litre, four-cylinder engine with one turbocharger. It’s armed with 421hp and 500Nm of pulling power.

In the A45 S, this unit takes the car from 0-62mph in just 3.9 seconds, before hitting a top speed of 168mph. Of course, the GLB 45 is going to be larger and heavier than the A45, so the SUV probably won’t be quite as quick as its smaller relative. However, it won’t be lackadaisical by any stretch of the imagination.

Inside, you can expect to find Mercedes’s MBUX infotainment setup, which is already commonplace in the Mercedes A-Class and Mercedes-AMG A35. This system unites the usual, dashboard-mounted infotainment and digital driver’s display as a pair of twinned screens. The highlight of MBUX is its Augmented Reality satnav, which places 3D graphics over a live feed of the road ahead, captured by a front-mounted camera. Plus, you can expect front sports seats to be fitted as standard, as well as a flat-bottomed, Nappa leather steering wheel and a cabin that features black Artico leather.

Bookmark this page to stay up to date on the 2020 Mercedes-AMG GLB 45.