Kia plugs the Soul in its range with new electric car 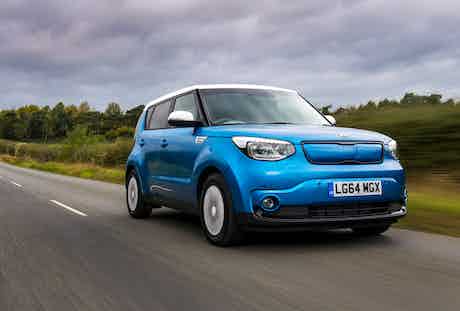 Kia has announced prices and details for the new Soul EV. The carmaker’s first foray into the electric car market costs from £24,995

Kia has released the first UK details of the Soul EV – its first electric car to be available on these shores.

Turning the Soul into an electric car involved extensively reengineering the car to fit a class-leading 27kWh battery pack and a 109hp electric motor. Deploying its full 210lb ft of torque from rest, the Soul EV has been designed to nip around city streets, covering the 0-60mph sprint in 10.8 seconds and hitting 90mph flat-out. A full charge from a standard plug takes up to 13 hours but fast chargers can cut this to five.

Other technologies the car employs to make the most of its efficient powertrain include regenerative braking when coasting or slowing, an intelligent climate control that can tell when only the driver is in the car, additional aerodynamic features to reduce drag and the fitment of super-low rolling resistance tyres, which use 10 per cent less energy than normal low-rolling resistance ones.

Electricity! Kia is proud to tout that the 274.5kg battery pack fitted to the Soul EV has a class-leading capacity of 27kWh which gives you a total (theoretical) range of 132 miles. The pack has been mounted low in the floor so the car only loses 31 litres of boot capacity and  80mm in rear legroom. The batteries have their temperature monitored to maintain optimum performance and longevity, though, the manufacturer still offers its seven-year/100,000-mile warranty – impressive for such a forward-looking car.

Considering most BMW i3s will be specified to a price higher than the Soul EV and the Volkswagen e-Golf is marginally more expensive, the Soul EV looks like reasonably decent value at £24,995, after the £5,000 government grant. Take into account that it has a larger claimed range than its rivals, is marginally bigger inside and is already in top-spec form, then the Soul could be the EV of choice for families.