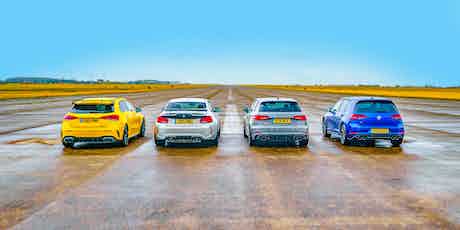 It’s the ultimate German sports car shootout! In this carwow drag race, four of the hottest performance models from Audi, BMW, Mercedes and VW go head-to-head, so we can find out which one is the fastest of them all.

On paper, the Mercedes-AMG A45 S has the best chance of victory in this drag race. Its 421hp, 2.0-litre, turbocharged, four-cylinder engine is the most powerful here, and it also has all-wheel drive that can launch it off the line like a rocket. However, it’s also the heaviest car here, tipping the scales at a pretty portly 1,635kg.

The all-wheel-drive Audi RS3 Sportback poses a real threat to the A45 S. Its 400hp, 2.5-litre, turbocharged, five-cylinder engine is almost as punchy as the Mercedes-AMG’s, and the 1,530kg Audi has the benefit of being considerably lighter. Don’t discount the BMW M2 Competition, either: the rear-wheel drive may be a disadvantage in the damp conditions, but the car’s 410hp, 3.0-litre, turbocharged, six-cylinder engine means it has plenty of performance once the wheels find grip on the slippery surface.

As a wildcard entry, we’ve also included the humble-in-this-company Volkswagen Golf R. Its 300hp, 2.0-litre, turbocharged, four-cylinder engine is comprehensively outgunned by the other cars here, but the VW is also a far cheaper car. Plus, its all-wheel drive system could be a thorn in the side of the rear-wheel drive BMW.

So, which German hot hatch (or sports coupe) comes out on top in our drag race? Watch the video above to find out.