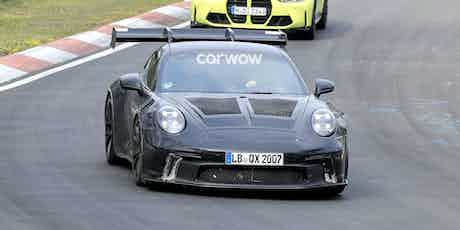 The new Porsche 911 GT3 RS has been spotted testing and is shaping up to be an even more hard-core version of the already uncompromising GT3. Read on for full details…

The Porsche 911 GT3 has already been launched, but there’s an even more hardcore version called the GT3 RS on the way, and it’s been spotted being put through its paces on the Nurburgring racetrack.

The Porsche 911 GT3 is a long-established alternative to other hard-core sports cars such as the McLaren 600LT and Mercedes AMG GT R Pro, and the RS model takes this as a basis and adds more track-focused features and weight reduction.

The Porsche 911 GT3 already looks like a racing car that took the wrong turn at Silverstone to find its way on the M1, but it’s seeming like the RS model will look even more dramatic.

It still looks like a 911, but the GT3 RS features a different nose to improve airflow, a dual-tip exhaust centrally in the rear bumper (a hallmark of the model) and most obvious of all, a gigantic rear wing to generate downforce on the racetrack.

The opening in the lower section of the front bumper is bigger to help guide air to the radiators and there are two sizable air vents in the bonnet to help hot air escape from under the car.

At the front of the car, 20-inch alloy wheels are fitted as standard with the rears slightly larger at 21-inches. All four come with race-spec centre locks instead of conventional wheel nuts.

The GT3 RS has a set of vents ahead of the doors and some huge brakes behind the alloys. The rear end is covered by temporary plastic cladding, but it clearly features a large diffuser that works along with the gigantic wing to give the car more downforce and boost grip levels in fast corners. As on the normal 911, the brake light runs across the width of the car.

The GT3 RS’s interior hasn’t been spotted yet, but the already-revealed Porsche 911 GT3 gives you a pretty good idea of what the cabin will look like. It’ll be almost completely devoid of creature comforts, with the rear seats thrown out and proper low-slung racing bucket seats upfront.

Air-con and an infotainment system are fitted to the GT3 but these are usually not included as standard in the RS model, to save weight. You can add a roll cage stuffed in the back and six-point harnesses to the GT3, and these will likely be standard in the GT3 RS.

The new 911 GT3 RS will be fitted with a naturally aspirated 4.0-litre flat-six engine that will produce more than 510hp and help the car hit 62mph from zero in less than four seconds. Every GT3 RS will be rear-wheel drive, but you’ll be able to choose between a dual-clutch automatic and a manual gearbox.

The new GT3 RS won’t be quite as fast as the four-wheel-drive 911 Turbo S in a drag race but it’ll be lighter and its firmer, track-focused suspension should make it quicker through the corners. It’ll also be the fastest 911 that’ll come with a manual gearbox option – that might be a crucial selling point if you’re the sort of petrolhead who prefers changing gear yourself.

The Porsche 911 GT3 manages to go from 0-60mph in 3.2 seconds. That’s just half a second slower than the all-wheel-drive Turbo S — which is impressive considering the GT3 is rear-wheel-drive only. It’ll top out at 199mph too.

The RS model will have more downforce, which means it won’t have as high of a top speed as the GT3, but it’s likely to be lighter and may be able to outperform its sibling in the 0-60mph sprint.

The 911 GT3 weighs just 1,418kg in manual guise (1,435kg for the automatic), and you can expect that figure to drop in the RS version thanks to extensive weight-saving measures.

Official details on the new 911 GT3 RS are yet to be revealed, but the car will probably be revealed later in 2021 with customer deliveries starting soon after that.

The new GT3 RS will be priced from approximately £140,000, but add a few bells and whistles – such as fancier interior trim, upgraded carbon-ceramic brakes and a sports exhaust – and you may need to hand over around £160,000.

If you can’t wait for the new 911 GT3 RS, read our detailed Porsche 911 review or compare the best sports cars currently on sale.