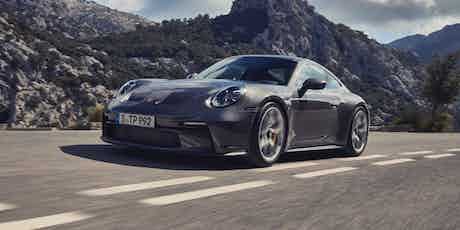 Touring pack makes a return for the 911 GT3, bringing a more subtle and road-friendly edge to this track monster. Read on for full details.

A new version of the Porsche 911 GT3 Touring has been revealed, bringing a more road-friendly edge to an otherwise hardcore track car.

The big thing about the Porsche 911 GT3 Touring is the difference in design over the standard car.

One obvious change is the removal of the gargantuan rear wing, replaced with a more streamlined engine cover. Other tweaks for the Touring include aluminium window surrounds while the front end is painted in the car’s body colour, rather than a separate black as on the regular GT3.

It retains a lot of racier elements, however, such as the deep bonnet vents and aggressive diffuser at the rear.

The Porsche 911 GT3 Touring isn’t a massive departure inside from the standard car — so don’t expect a sudden set of rear seats — but it does get a lot of leather for no extra cost.

There’s some new embossing on the front of the dashboard and door panels as well. You can of course opt for Alcantara everywhere instead if you fancy, although that may defeat the purpose of the Touring.

That trademark 4.0-litre flat-six from the regular Porsche 911 GT3 is carried over intact to the Touring.

The result is 510hp and 470Nm of torque delivered to the rear wheels. You’ll have the pick of a seven-speed PDK automatic or six-speed manual gearbox for the first time on a Touring as well.

No word yet on how this all translates to sheer pace, but expect near-identical figures as the standard 911 GT3 — so 0-60mph in 3.4 seconds and a 198mph top speed.

That’s the exact same as the regular car, so it’s all a matter of preference really.