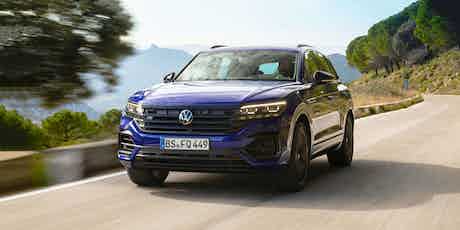 The new Volkswagen Touareg R has been revealed as a high-performance, luxury SUV with 462hp. Read on for everything you need to know…

You can tell the VW Touareg R apart from the standard car thanks to its sportier R style bumpers, a smattering of R logos and some massive alloy wheels up to 22 inches in diameter. Sure, it might not have the same sporty presence as a Porsche Cayenne e-Hybrid or quite as much understated Swedish style as the Volvo XC90 T8, but the VW Touareg R’s massive gaping grille (now with R-specific black strips) will make sure you get noticed.

The VW Touareg R gets its own exclusive interior, featuring black leather seats with R logo in the front headrests, brushed stainless steel pedals and a panoramic sunroof. You can also spend plenty more on optional extras such as a 780 watt Dynaudio sound system.

Volkswagen’s Innovision Cockpit comes as standard in the Touareg R. So the dashboard is dominated by two large screens – a 12-inch screen behind the steering wheel with your digital dials and a 15-inch screen in the middle of the dashboard that controls all the infotainment functions.

The Touareg is also the first R model to get plug-in hybrid power. This means it gets a 136hp electric motor alongside a 340hp 3.0-litre V6 petrol engine to give a combined total of 462hp and 700Nm of torque. It’s not just about power – it can travel up to 30 miles on electric power alone at up to 86mph. Full performance stats haven’t been released, but it’ll almost certainly reach 60mph from rest in less than six seconds and hit 155mph.

The VW Touareg R’s FourMotion four-wheel-drive system can send power to whichever wheels have the most grip – handy in slippery surfaces or on roads with tight, twisty corners. You can also switch between driving using electric power alone and driving with the petrol-electric hybrid at the touch of a button. You can also choose between Eco, Comfort, Normal and Sport modes for on-road driving and Off-road and Snow modes for more adventurous driving. Finally, there’s an option to upgrade your VW Touareg R to include Gravel and Sand modes.

The Adaptive Cruise Control keeps a regular distance between you and the car in front, while the Lane Assist feature keeps you within the white lines. What’s new in the VW Touareg R is that this option now works at up to 130mph (on an unrestricted German Autobahn, of course). You have got to keep one hand on the steering wheel at all times, but VW says new sensor tech in the steering wheel means you merely have to touch it to keep the system engaged.

The VW Touareg R’s 3.5-tonne towing limit is one of the highest towing capacities of any plug-in hybrid and on par with the mechanically similar Porsche Cayenne e-hybrid. That’s a few hundred kilos more than a BMW X5 plug-in hybrid and over 1000kg more than the Volvo XC90 plug-in, so it’ll be easily capable of pulling a big caravan or boat.

The VW Touareg R has a trailer assist function that helps you make tricky parking manoeuvres when you have a trailer. You put the car into reverse and then hit the Park Assist button. A trailer symbol appears on the driver’s display and you use the mirror adjustment switch as a joystick to tell the system where you want the car to go. Once set, the car takes over and drives into the desired space. And, because it’s a hybrid, it can do this all in silent electric power – so you may have to make your own reversing vehicle beeps to warn others!