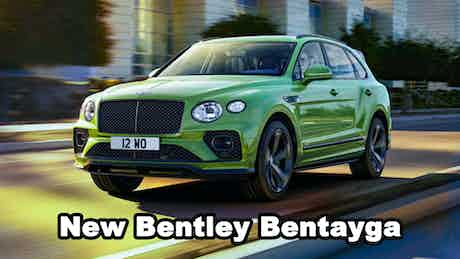 No matter how luxurious you reckon something is, there’s always a way to improve it. Take the Bentley Bentayga, for example. That was just about the poshest SUV in the world when it came out. But now Bentley reckons it can do better.

That’s probably because Rolls-Royce came along and made its own SUV – the Cullinan… So, Bentley’s given the Bentayga a makeover.

And here is everything you need to know about it.

The old Bentayga wasn’t exactly a subtle-looking thing, but Bentley’s gone and given the new car an even bolder design thanks to a ‘prouder, taller and more self-confident’ front end.

What this actually means is that the grille is larger and has moved higher up so it’s even more imposing. The vents underneath have been remodelled a bit too, and you can get the Bentayga with a set of new alloy wheel designs.

Bentley’s also been busy round the back. In fact, they’ve changed every single panel on the Bentayga’s rear-end. Despite this, it still produces exactly the same amount of lift and drag as the old car.

The brake lights are also new, and they follow the shape of the ones you get on a Continental GT and Flying Spur. The exhaust pipes are larger as well, and Bentley’s given the Bentayga a full-width boot lid.

The old Bentayga’s crystal-glass headlights were some of the coolest on any new car. But, they’ve even managed to upgrade these for the new model.

For a start, they get a new slightly elliptical design and come with the LED Matrix technology borrowed from the Continental GT and Flying Spur. Bentley has also moved the lights up on the Bentayga’s face by 30mm. So now they peer down on other cars with even more disdain.

Not content with all that, Bentley’s also upgraded the water jets that clean them. No, they don’t squirt vintage champagne all over your car. But they are heated and come with 22 individual nozzles to reduce the amount of spray that ends up on your car’s paintwork.

Bentley might have a reputation for being a bit old-fashioned. But, the new Bentayga gets plenty of high-tech infotainment features. Now, you get Android Auto for the first time and wireless Apple CarPlay. You also get a fully digital driver’s display instead of the old car’s analogue dials – just like in the Flying Spur. The removable 5-inch tablet screens for the back seats are bigger than ever and there’s wireless phone charging and a load of USB C ports as standard.

Bentley’s also beefed up the Bentayga’s stereo. The old car’s optional 590W Signature system is now standard. And you can upgrade to a 1,780W Naim Audio unit with 20 speakers if you want. This also gets a set of ‘super tweeters’. They might sound like Donald Trump’s social media account, but they’re special speakers that deliver clear high-frequency sounds without hurting your ears.

Bentley hasn’t made too many changes to the new Bentayga’s interior. After all, the old car’s cabin was already posh enough to rival Buckingham Palace. So, rather than completely redesign it, they’ve just given it a few nips and tucks.

The design of the seats is new, and the steering wheel has been tweaked to make it look a bit more modern. The old car’s circular air vents – the ones that looked like they belonged on a classic speedboat – have also gone. Now you get a one-piece central vent with a built-in Breitling clock on the dashboard.

The door trims have also been revamped, and Bentely’s replaced the old handles with some plusher horizontal door pulls. Still, you can’t get it with doors that close themselves like in a Rolls-Royce Phantom, though. Ah well…

As ever with Bentley, there are plenty of ways to personalise your Bentayga. As well as the mind-boggling range of trims, leathers and veneers you could have on the old car, there’s a new brushed aluminium option that’s machined using actual diamonds to give it a 3D effect.

Or, you can go old-school and get your Bentayga’s interior fitted with some new Koa or Crown-cut Walnut wood trims. You know, because normal Walnut is for the hoi polloi.

You can also commission Bentley to kit out your car with a bunch of one-off extras. For example, you can have your Bentayga fitted with anything from storage for your fly-fishing gear in the boot to bespoke falconry equipment – if that’s your thing. All of this comes at a price, though. And as they say, if you have to ask how much it costs, you probably can’t afford it.

If a Range Rover is a block of penthouse apartments, the Bentayga is more like the Empire State building. It’s simply vast.

Now, though, Bentley’s gone and made it even bigger. Only they haven’t changed the bumpers or the roof, but the wheels… Now, each wheel sticks out 20mm further than before to fill the Bentayga’s massive wheel arches a bit better. Bentley reckons this isn’t just for looks – it also helps make the Bentayga more stable at high speed.

The mainstay of the new Bentayga range will be the 4.0-litre V8 petrol model. This makes 550hp and 770Nm, just like the old car.

Also like the old model, you’ll be able to get a plug-in hybrid Bentayga. This’ll get a 449hp 3.0-litre V6 petrol engine and an electric motor that’ll let you drive for about 30 miles in electric-only mode.

If you’re more interested in outright speed than keeping your Tesla-driving friends happy, then there’ll also be a new Bentayga Speed along before 2021. This’ll get the same 635hp W12 engine as the old car, so it’ll do 0-60 in less than 4 seconds and hit 190mph.

Which, by the way, makes the Bentayga Speed the fastest SUV in the world. It’s even faster than a Lamborghini Urus, for goodness sake! Well, by 0.5mph anyway…

Plenty of people who own a Bentley also employ someone to drive it for them. So, it only makes sense that the back seats are just as luxurious as those in the front. Well, just like the old car, you can choose to have your Bentayga with 4, 5 or 7 seats. Only here, it’s a case of less is more.

Pick the four-seat option and you get a set of uber-luxurious reclining thrones in the back. These get 30mm more legroom than the old model. And, if you lie back you’ll get 100mm more headroom. Plenty of space for a top hat, then.

That’s not to say the other versions aren’t luxurious, too. Bentley’s upgraded the foam in its seats to offer more shoulder support. And the five-seat model gets new rear seats that can recline twice as far as in the old car. And they’re ventilated, so they can blow some cool air directly at your upper-class ass on a hot day.

The old Bentayga was one of the most relaxing cars to drive. It was super quiet and mega comfortable thanks to its standard air suspension. The new car gets the same setup, but Bentley’s upgraded the active anti-roll system so there’s even less danger of passengers spilling their champagne as you barrel down a twisty road.

You can even get the Bentayga with a system that’ll predict when the traffic lights ahead are going to turn green. So you can waft imperiously past traffic without needing to slow down.

You’ll also be able to get your Bentayga in optional ‘All Terrain’ spec, which adds extra off-road driving modes to cope with harsher road conditions. Handy if your Chelsea mansion ever gets snowed in…

Bentley hasn’t confirmed how much the new Bentayga will cost. But, you can expect to be a bit pricier than the old car. All these upgrades don’t come cheap, after all!

V8 Bentaygas will be the first to go on sale, but you’ll have to wait a bit longer before you can get your hands on the hybrid and Speed versions.

See how much you can save on a new Bentley