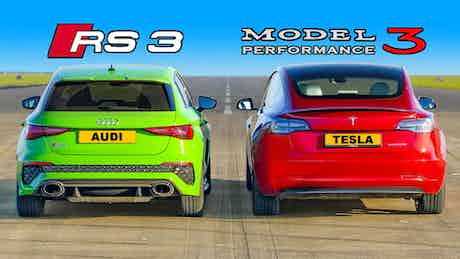 Today we’re going to settle a pub debate that most of us have had: Which is faster, petrol or electric?

Representing internal combustion, we have an Audi RS3. It has a 2.5-litre five-cylinder turbocharged engine with 400hp and 500Nm of torque. This is fed to a seven speed dual-clutch automatic gearbox connected to Audi’s Quattro all-wheel-drive system. It has the advantage on weight, coming in at 1,570kg.

Taking on the Audi, we have a Tesla Model 3 performance. It’s heavier than the Audi, tipping the scales at 1,850kg, but it does have more power. It has two electric motors with a combined 490hp and 660Nm of torque. Being the dual motor version, it also has all-wheel-drive.

So will the Tesla’s extra power be enough to beat the Audi? Or will the extra weight be its downfall? You have to watch the video to find out.