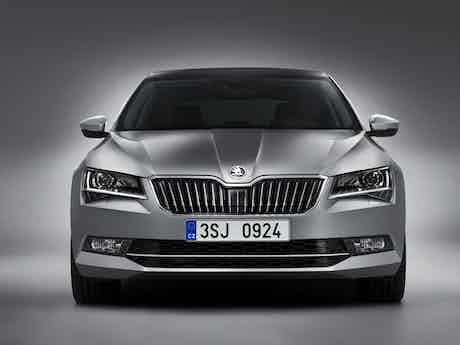 With the Volkswagen Passat now chasing buyers of upmarket models such as the BMW 3 Series and Mercedes C-Class, the might of Volkswagen Group is putting all its efforts into making the new Skoda Superb better than the mainstream opposition.

Skoda has quickly elevated itself from a budget brand to a worthy opponent to the likes of Ford and the new Superb saloon is set to be priced from £20,000 to compete directly with the Mondeo.

Keep reading for five reasons why the Skoda Superb has the Ford Mondeo bang to rights.

1. Better looking than a Mondeo

The Superb has more than a passing resemblance to the VisionC concept car that the company displayed at last year’s Geneva Motor Show. The big grille, intricate headlight design and angular shapes make the Skoda look just as classy as the Ford Mondeo and arguably more imaginative than the Aston-Martin-grille-sporting Ford. Skoda has also scrapped the ungainly looking boot lid of the old model.

2. More spacious than a Mondeo

The Superb has garnered a reputation for having record-breaking levels of rear legroom in the class and this model is no different – its back seat will have double the legroom of some rivals. A 625-litre boot beats the Ford Mondeo hatchback’s capacity by more than 100 litres and by more than 300 litres when both cars’ back seats are folded away. Tech won’t be in short supply either; with an iPad controlled infotainment system available and wireless charging making an appearance in 2016.

3. More economical than a Mondeo

Most buyers are likely to opt for diesel power and the 1.6-litre GreenLine model will be free to tax and touch fuel economy of 80mpg – making it cheaper to run than a Mondeo.  Bigger 2.0-litre diesels, with between 148hp and 187hp, will also be available for a better balance of economy and power.

4. Faster than a Mondeo

If it’s the latter you are after then petrol-power is the way to go and Skoda will fit the Superb with the 276hp 2.0-litre turbocharged engine that usually lives in the SEAT Leon Cupra 280… The fastest Mondeo makes do with a measly 237bhp. In the Skoda the Cupra’s engine will be mated to four-wheel drive, to create something of a wolf in sheep’s clothing. It is also likely cost about the same as the Golf R despite offering close to the same performance and much, much more space.

The other petrol option is the 1.4-litre 148hp engine that finds a home in numerous models across the VW Group.

There has also been talk of a hybrid model that would use the same 1.4-litre petrol engine, but boosted by an electric motor pushing out more than 100hp.

5. Safer than a Mondeo

Even basic S models come with city safe emergency braking that you don’t get as standard in basic models of either the Ford Mondeo or the Vauxhall Insignia. Other equipment includes kit such as a Bluetooth phone connection and DAB radio. Next-level-up SE gets you sat-nav, while the top-of-the-range Laurin & Klement models will have a leather interior and other niceties that elevate the big Skoda to Mercedes-like levels of plushness.