Overloaded cars: what are the dangers? 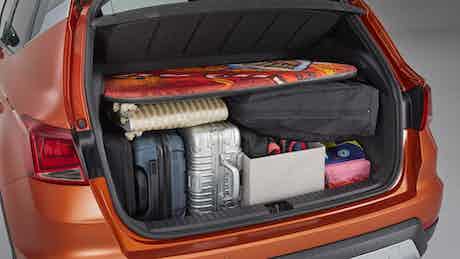 At some point, you will probably need to make the most of your car’s cargo carrying abilities. You could need to carry heavy loads as a result of a weekly shop or a big clear out. But what are the dangers of an overloaded car?

Overloading a car isn’t a trivial matter, as a car that’s carrying more weight than it was designed to carry can be a serious safety hazard to yourself and other road users. Read on for a full rundown of the risks of overloading your car, as well as tips on how you can avoid these dangers.

What happens if you overload a car?

As anyone who’s ever driven a fully-laden car when heading off on a family holiday can attest to, a car gets very heavy when it’s crammed with passengers and their various bits and bobs. Overloading a car will have a great impact on the way it drives.

For instance, the extra weight will make it much harder for you to control an overloaded car – especially if the weight isn’t distributed evenly in the car. It won’t respond to steering inputs as quickly, and it will take a lot longer to build up and maintain speed.

All that extra weight will also increase your car’s stopping distance, so an overloaded car will be trickier to slow down when avoiding an unexpected obstacle.

Depending on the size and quantity of the items you’re loading into the car, visibility may also be compromised in an overloaded vehicle. Fill the car’s boot or cabin to the roof with gear, for instance, and you’ll obscure the view out of the rear window.

Perhaps the most serious consequence of overloading a car is the extra strain they put on some of the key components on your car. Your car’s suspension will have been engineered to accept a specific weight, so any payloads that exceed those limits will mean your car’s suspension will be put under far more strain than it was designed to tolerate – meaning parts will wear out faster than normal and could potentially even fail when you’re driving.

When to change car tyres

The same principle applies to your car’s tyres. All of that extra weight pushing the tyres into the tarmac will not only wear them out faster, but also increases the chances of them failing due to all that extra mass.

Is there a penalty for overloading a car?

On top of the safety risks, there is also the potential of other ramifications for being caught with an overloaded car. If the police catch you driving an overloaded car, you can be struck with a fine of up to £300 and have up to three penalty points issued to your driving licence.

If your overloaded car poses a threat to the safety of yourself and other road users, then the punishments can become more severe. In this instance, you could face an even higher fine of £5,000. Your case may also be sent to court, where if found guilty you may face a driving ban or even a prison sentence. Do also remember that, if your car is involved in an accident and is deemed to be overloaded, you may potentially invalidate your car insurance.

How much weight can my car carry?

All cars have a gross vehicle weight rating, or GVWR, which is the maximum weight the car is able to carry as specified by the car manufacturer. This weight will consist of the car’s weight, plus the weight of any fluids such as engine oil and fuel, the weight of the passengers and any other items that are stored in the cabin.

If you’re towing a trailer or have a roof box fitted to your car, do also bear in mind this will also have an affect on your car’s gross vehicle weight. With roof boxes, there are also maximum weights to consider, which include both the weight of the roof box itself and the payload that’s being carried in it.

How to load a car safely

One thing you should consider when you’re loading lots of items into your car is to keep the heaviest items as low down in the car as possible. Putting all that weight low down in the car will help lower its centre of gravity. This will mitigate some of the effects that extra weight will have on your car’s handling.

This tip can also apply if you aren’t carrying many items in your car at any one time. For example, if you’re carrying loose items or bags of shopping in your car, they’ll be more secure somewhere like your car’s rear seat footwells than the boot.

Likewise, don’t leave any small or loose items on your car’s parcel shelf, as you run the risk of these being launched forward and potentially striking yourself or a passenger in the event of a car accident. When loading a car with items, you should also prepare your car for the extra weight it will be carrying.

For example, your car’s VIN plate and owner’s manual will usually list the pressure your car’s tyres should be inflated to when the car is fully laden.

If possible, try to weigh whatever it is you want to stow in your car, especially if you intend to carry lots of heavy items. This will give you a better idea of just how much weight you’ll be putting in your car, and may help you determine whether your car is overloaded or not.