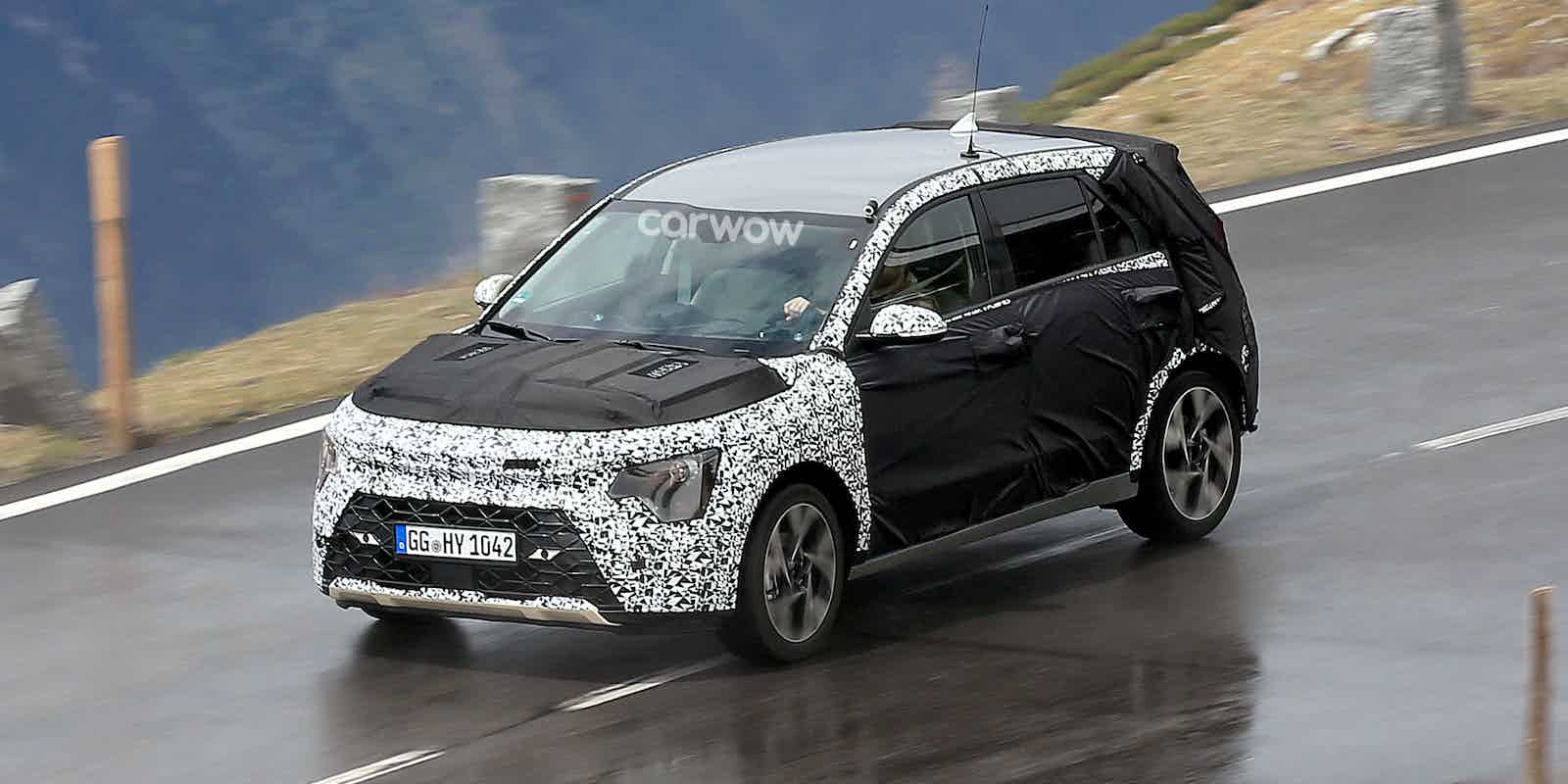 The new Kia Niro has been spotted during winter testing. While still heavily camouflaged, you can now get a better idea of what it will look like before the official debut later this year. Read on for more.

The redesigned Kia Niro is due to be revealed in the coming months and it has been spotted undergoing some cold-weather testing.

The current model is still a solid offering but this comprehensive update should help bolster sales figures when it is released in 2022.

Kia has peeled back some of the black fabric camouflage to reveal a bit more of the new Niro’s front end.

The wavy eye-squinting wrap underneath is less effective at hiding the raised bonnet and wide front grille and the unobscured headlights look unlike any other Kia currently on sale.

The camouflage rear cladding is still in place, although the boomerang style rear lights do look similar to the units on the recently revealed 2021 Bayon SUV (shown above).

The body also looks to be slightly longer than the current Niro, which should translate into improved passenger and cargo space.

The finished car should sport design elements inspired by the HabaNiro concept (shown above) including, possibly, a similar two-tone paint option.

While there aren’t any official images to go on, it is highly likely that the new Niro’s interior will combine elements of other recently released Kias, such as an improved digital dashboard and larger central infotainment screen. You can expect both displays to be  at least 10.25-inches wide.

Equipment levels are generous in the current model, even the mid-range offerings have heated leather seats. The new Kia Niro should be at least as well-equipped.

Specs for the new Kia Niro’s engines have yet to be revealed but, as with the current Niro, you can expect a selection of Hybrid, plug-in Hybrid and fully electric variants. A charging port visible above the left front wheel arch and an exhaust pipe peeking out below the rear bumper indicates that this test car may be a plug-in Hybrid.

The current Hybrid and plug-in Hybrid models use a 1.6-litre petrol engine and electric motor to provide a combined 139hp. The Hybrid has a small 1.56kWh battery that is charged by the petrol engine and under braking, while the plug-in model has a larger 8.9kWh battery which requires external charging but can provide up to 30-miles of all-electric range.

These engines should be carried over in updated form for the 2022 Niro.

Kia will also release a new e-Niro electric car as part of its plans to launch 10 new electric cars before 2026, including an all-new electric SUV (shown above.)

Seven of these EVs will be built using components shared with Hyundai, including Kia’s upcoming electric coupe-like SUV. This as-yet-unnamed vehicle will have around 300 miles of range and 100kW fast-charging capability; features that may well be in the new e-Niro as well.

The current e-Niro is available with either a 39kWh or 64kWh battery pack, the former offering 134hp and 180 miles of range while the latter produces 201hp and can travel up to 282 miles on a charge. It is unclear at this stage whether the new model will be available with more than one motor/battery combination.

There is no release date yet for the new Kia Niro, but it’s likely it’ll make its official debut later this year and go on sale in early 2022. Current entry-level Hybrids cost from £25,150, while plug-in Hybrids set you back from £30,515.

There will be the inevitable price increase when the new model arrives, though, so you can expect to pay around £26,000 for an entry-level Hybrid Niro in 2022. The new Kia e-Niro electric car will arrive later, and is expected to set you back at least £30,000.

Can’t wait for the new car to go on sale? Check out the latest Kia Niro and e-Niro deals or compare the top 10 best SUVs on sale.